Ћ “Evolution in Communication?” There’s an App for That

Posted by Rebecca Green in Language and Culture on November 15, 2013 0 Comments 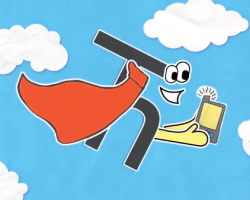 Paul Mathis is proposing an “evolution in communication.”

The Australian restaurateur has created a proposed addition to the alphabet: Ћ. The letter is designed to be a stand-in for the word “the.” According to Mathis’ website, the word “the” is one of the most commonly-used words in the English language, appearing in 80% of all English paragraphs.

With an investment of $38,000, Mathis has created a new keyboard app and website to showcase Ћ, as well as a bombastic video meant to convince the public to “put the back on top where it naturally belongs.” The app is currently available via Google Play, but has been snubbed by Apple. For the linguistically inclined Apple user, Mathis’ website offers instructions on how to add the Ћ symbol as a keyboard shortcut on iPads and iPhones.

Mathis decided to create the Ћ symbol as a way to save “space, pen strokes, and key strokes.” The idea being that Ћ saves time and characters for texters and tweeters. The symbol Ћ would be pronounced “th” and fall after Z in the alphabet.

Futhark and Ye olde “thorn” in Mathis’ side? The old and new of Ћ

While the texting/tweeting applications are a recent development, it turns out that Mathis’ Ћ is actually nothing new.

It’s basically a redesign of the Old English letter þ, or “thorn.” Thorn, like Ћ, was pronounced “th” and came from the Old English runic alphabet, Futhark. If you’ve ever seen a place called “Ye Olde Watering Hole” or “Ye Olde Steakhouse,” it’s thorn that’s to blame. In spite of being pronounced differently and representing the word “the,” old thorn slightly resembles Y. French printing presses didn’t have the thorn, so they just used the letter Y instead. If not for a missing letter in a printing press, “Ye Olde Watering Hole” might have been “The Olde Watering Hole.”

If you added a stroke to the top of thorn back in the old days, you formed the derivative symbol “that.” Talk about a time-saver! With just one symbol, monks no longer had to write “the” or “that.” Unsurprisingly, monks and other members of religious institutions became so fond of the symbol for “that,” the symbol managed to outlive its parent, thorn.

The thorn and “that” symbols eventually fell out of use and were removed from the English alphabet, but Futhark arguably lives on in the signage of cheesy Tudor-style establishments. The thorn is also still used today as part of the Icelandic alphabet.

There’s another symbol we use that bears a remarkable resemblance to the new Ћ. In fact, it’s mentioned in Mathis’ video. It’s the ampersand, beloved by note-takers and branded as copyright in so many company names (Barnes & Noble, H & M, etc.).

The Ћ video is quick to remind us of an important fact about the ol’ ampersand: the symbol represents only the fifth most commonly-used word in the English language. Who’s #1? “The” of course!

The ampersand was actually included in the English alphabet for years. It came after Z, just where Mathis would like to see Ћ in the future. The ampersand has an illustrious history going back to the 1st century CE. Once a part of Roman cursive, the symbol stuck around as part of the alphabet well into the 19th century. When it was first added to the alphabet, it was pronounced “and.” However, it was a tradition in English-speaking schools to preface any letter that was also a word (“A” or “I” for example) with the words “per se.” When the alphabet was being taught in schools, the end of it read “X,Y,Z, and per se &” (pronounced “and per se and”). Over time, it came to be called the “ampersand.”

Are people using Ћ to write or are they just writing about Ћ?

A twitter search for Ћ brought up usage that pretty much falls into 2 categories:
1. Articles or links to articles about Mathis and the new symbol
2. Tweets by or mentioning one of Mathis’ many Melbourne restaurants.

In fact, there was only one tweet (unrelated to Mathis’ circle) that actually used Ћ as a letter/ligature/logogram. It came from one @AaronPrillaman, a musician from Tempe, AZ. It read:

The free version of the Ћ keyboard app advertises itself as more than just a keyboard with Ћ. It’s also supposed to be “one of the most unique predictive word engines which is clever but not invasive.” It has an average rating of 3.2 stars (out of 5) in Google Play and most of the app’s commenters don’t seem particularly thrilled about it. The paid apps (charging anywhere from $1.03 to $2.07) have deceptively higher ratings, coming from only a few users.

Recent press appearances and internet hype may help Mathis recoup his initial investment, but it’s probably good that Mathis said he’s not in the letter creation business to make money. In this writer’s humble opinion, it’s unlikely that Ћ will really take off, much less become the 27th letter of the alphabet. #AnEducatedGuess #Provemewrong #Ћ