10 Free Language e-Books for the Kindle

Posted by Daniel Echevarria in Language and Culture on August 18, 2010 2 Comments 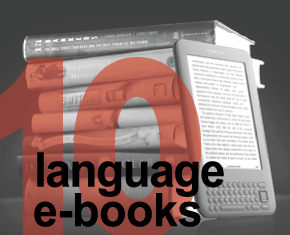 Linguaphiles and gadget lovers alike are waiting in anticipation for August 27th, when Amazon will finally release the latest version of its popular Kindle e-Reader. The third generation Kindle quickly sold out on Amazon.com, and the product is currently receiving the type of media fervor reserved for Steve Jobs and company. Technology and social commentators throughout the Internet tend to agree that this generation Kindle coupled with the i-Pad will save the publishing industry. That’s not Beyond Words’ call to make, but we can go ahead and join the crowds of eager readers waiting to see what the buzz is all about.

According to Amazon, the new Kindle will feature built-in Wi-Fi, a higher contrast e-ink screen than last generation’s, crisper and darker fonts, a much smaller body size and weight, increased storage space, and even a longer lasting battery. If those product specifications are even half true, old Kindle users won’t be disappointed, and–as the company is hoping for–general consumers may decide it’s finally time to make the jump to e-reading. Already, Kindle’s e-book business has out-shined Amazon’s hardcover book sales.

Still, you don’t even need to buy e-books to take advantage of the Kindle. One of the most interesting features of e-books is the availability of free books from sites like Project Gutenberg and ManyBooks.net. These sites make available thousands of books that are in the public domain due to expired copyright. ManyBooks has a large catalog of public domain books that can be downloaded in the Kindle’s .azw file type. We’ve compiled some of the most interesting free e-books about language from their site. We hope you enjoy these digital reads!

‘English as She is Spoke: or, A Jest in Sober Earnest’
Authors: Jose da Fonseca and Pedro Carolino
Publication: 1884

For more than 100 years, readers have regarded this book as either one of the worst works of translation in history or as a masterpiece of comedy. This Portuguese-English phrase book features idiomatic slip-ups like translating the phrase “raining buckets” as “raining in jars.” Referring to the book, Mark Twain said, “Nobody can add to the absurdity of this book, nobody can imitate it successfully, nobody can hope to produce its fellow; it is perfect.”

Marie Lebert is a researcher specializing in technology and its evolving relationship with language, books, and other media. One of her most recent studies, this e-book focuses on the history of languages on the Internet, from the first online language dictionaries and multilingual encyclopedias to machine translation.

Compiled by Greek historian Stanley Burstein, these lectures by the late Frank M. Snowden, Jr. focus on the influence of black people on language in Ancient Greece. Snowden held the title of American Professor Emeritus of Classics at Howard University, and he remains an authority on the topic of blacks in classical antiquity.

A linguist with degrees in several languages, Ivy Kellerman Reed dedicated a large part of her life to the advancement of Esperanto. She was a prolific translator in the international language and penned this influential grammar book.

It might prove difficult to find a science fiction story centered on linguistics and archeology apart from H. Beam Piper’s “Omnilingual.” First published in an issue of Astounding Science Fiction, Piper’s short story focuses on an expedition from Earth to Mars, in which scientists uncover Martian books, documents, and an alien Rosetta Stone.

‘Fifteen Thousand Useful Phrases: A Practical Handbook of Pertinent Expressions, Striking Similes, Literary, Commercial, Conversational, and Oratorical Terms, for the Embellishment of Speech and Literature, and the Improvement of the Vocabulary of Those Persons Who Read, Write, and Speak English’
Author: Grenville Kleiser
Publication: 1910

If this book’s enormous title doesn’t completely scare you away, you may discover a wealth of lessons on writing and speaking within its pages. Grenville Kleiser was both an American humorist and author, and he was an instructor in public speaking at Yale University. His handbook remains a popular resource for students currently studying language.

Benjamin Leonard D’Ooge headed the Department of Ancient Languages in Michigan State Normal College. Latin for Beginners is an excellent free resource for readers interested in learning the basics of Latin.

‘On the Study of Words’
Author: Richard Chevenix Trench
Publication: 1859

Both an Anglican archbishop and a famous philologist during his time, Richard Chenevix Trench based this book on a series of lectures he delivered at the Diocesan Training School in Winchester, England. The introduction to his study offers a glimpse of his position on language. Trench writes that “in words contemplated singly, there are boundless stores of moral and historic truth, and no less of passion and imagination, laid up–that from these, lessons of infinite worth may be derived, if only our attention is roused to their existence.”

Another British philologist, Ernest Weekley presided as Professor of Modern Languages at the University of Nottingham for almost half a century. He’s well known for his work on the English language, and The Romance of Words reads like an etymological dictionary written by someone truly smitten with words.

One of the initiators of the Protestant Revolution, Martin Luther produced the first German translation of the Bible, which would go on to influence the modern German Language. He wrote this letter as a defense for his once-controversial translation. Aside from a slew of entertaining insults aimed at his detractors, the letter also contains Luther’s thoughts on topics ranging from authorship to literal translation.