Posted by ALTA Language Services in Translation on August 10, 2018 0 Comments 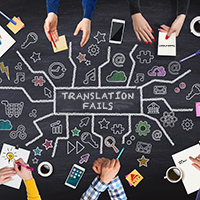 1.  Pepsi’s debut of their “Come alive with the Pepsi Generation” was understood in the Chinese translation as “Pepsi brings your ancestors back from the grave.”

2.  The American Dairy Association’s famous “Got Milk?” slogan didn’t work so well in their translation for Mexico: “Are You Lactating?”.

3.  Schweppes Tonic Water failed in Italy when the name was translated into “Schweppes Toilet Water.”

4.  Clairol’s hair curler, the mist-stick, had to be rebranded in Germany after they found out that “mist” in German means “manure.” The whiskey brand name Canadian Mist didn’t work out so well either.

6.  Mercedes-Benz initially launched in China with the name “Bensi,” which translates to “Rush to die.”

8.  IKEA wanted to promote the “fährt” (speed) of their desk wheel design, so they named the desk “Fartfull.”

9.  The classic Kentucky Fried Chicken slogan “Finger lickin’ good” was originally translated into Chinese as “Eat your fingers off.”

10.  HSBC had to undertake a $10 million rebranding campaign after they found that their translation of “Assume Nothing” was interpreted in several countries as “Do Nothing.”

These examples demonstrate how bungled translations can derail the best-laid plans of companies in a global marketplace. Companies undertake massive efforts to integrate their production, goods, and services among disparate cultures, so why undermine all of that work with substandard translation practices? Skimping on the translation process doesn’t make sense when the stakes are so high.

An extreme example of cutting corners is using online translation software. While these sites can provide the general gist of the text, much is lost in nuance and references, particularly when it comes to advertising and marketing. When you plug in text, translate it into another language, and then translate back into English, you get an idea of the twists and turns that can happen. Here’s an example using the first sentence of this article in Google Translate:

ORIGINAL ENGLISH: Spectacular translation fails are the stuff of legend.

As demonstrated with the Google Translate experiment, exceptional translations are as much an art as a science. The best translators can convey the meaning and spirit of the source text while avoiding negative idioms and cultural references that can undermine a company’s best intentions. On the other hand, the worst translators (and translation software) tell your audience to eat their fingers or summon the dead.

Employing professional translation services can save your company thousands, if not millions. With a network of 2000+ native language translators in over 100 languages, ALTA Language Services provides the best certified translation services in the industry. Make sure that your international business branding efforts are successful with ALTA’s translation services! For more information on our marketing translation, visit: https://www.altalang.com/translation-services/translation-for-sales-and-marketing/.

Kim Horn lives in State College, PA, and has been working with Alta Translation Services for over 20 years as a project manager and typesetter.