Posted by Maria Khodorkovsky in Language and Culture on October 23, 2008 0 Comments 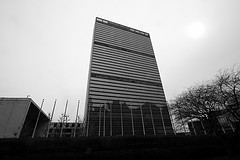 With 2008 being the International Year of Languages, I thought I’d wish a happy birthday to the UN, and do my part to spread the word about their language initiatives.

October 24, 2008 marks the 63rd anniversary of the Charter of the United Nations, written in 1945 in San Francisco by UN delegate representatives from 50 countries and ratified on October 24 by China, France, the Soviet Union, the United Kingdom, the United States, and a majority of other member countries. United Nations Day has been celebrated since 1948 with meetings, discussions, and exhibits detailing the past and present achievements and future goals of the organization.

In May of last year, the General Assembly of the UN proclaimed 2008 the International Year of Languages. Under the slogan Languages Matter, the UN launched a number of events and exhibitions ranging from courses in Chinese and Arabic calligraphy to surveys and studies conducted internally to determine the number of languages spoken by UN staff. While the official languages are English, French, Russian, Spanish, Chinese, and Arabic, in the New York headquarters (pictured above) alone, the total number of languages spoken proved to be over 350!

The United Nations Educational, Scientific, and Cultural Organization (UNESCO) goals for the International Year of Languages are to support and encourage language-related activities, to foster respect for and protection of all languages, and especially to help preserve endangered languages, linguistic diversity, and multilingualism. UNESCO particularly encourages individual outreach initiatives in the fields of education, social and human sciences, and scientific research.

UNESCO has chosen a great time to celebrate language diversity. Though difficult to calculate the exact number of languages spoken in the world, it is estimated to be about 7,000, not including dialects. In spite of the large linguistic assortment, it is also estimated that 96% of those languages are spoken by 4% of the population, with Asian and African languages accounting for the widest array. Also, if you take into account the astounding rate at which endangered languages cease to exist – about one language every two weeks! – UNESCO’s goal of protecting and fostering linguistic diversity is a welcome one in the face of ever-increasing globalization and homogeneity.