Posted by Jes Gearing in Language and Film & Music on February 2, 2010 0 Comments 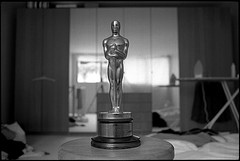 The 82nd annual Oscar Awards are coming up, and while most people have their eyes on the Best Picture or Best Actor/Actress nominations, I’ve got my eyes on the Best Foreign Language film list.

As usual, five feature length films were nominated — Ajami, El Secreto de Sus Ojos, The Milk of Sorrow, Un Prophète, and The White Ribbon. I immediately looked up the films to get a description of each one and share them here.

Israel’s official submission to the Academy Awards is a coming of age story of Nasri and depicts the conflict and confusion of growing up in a Jewish-Arab neighborhood in the Mediterranean city of Jaffa. Directed by Scandar Copti and Yaron Smith, it is the fifth ever Israeli movie to be nominated for an Oscar. Copti hopes that the film nomination will give people “a chance to understand what a Palestinian living in Israel is” (Ynet News). To further the cause, the film is the collaboration of both Jews and Palestinians and much of the dialogue is written in both Hebrew and Arabic. Peace is not easy to come by in the Middle East, but maybe this film will help break down some barriers. (source IMDB)

The project of Argentine director Juan José Campanella, it is based on Eduardo Sacheri’s novel La pregunta de sus ojos (The Question in Their Eyes). The movie is based on the flashback of Benjamín Espósito, a federal justice agent who becomes entangled in the investigation of a woman who is raped and murdered in her house in Buenos Aires. Set in the mid-1970s during a time of political upheval, the story also revolves around Espósito’s love and his determination to write the events into a novel. For the ending you’ll just have to watch the film. (source IMDB)

The Milk of Sorrow

Again, from South America, The Milk of Sorrow is a Peruvian film directed by Claudia Llosa. It addresses the violence toward women in recent Peruvian history. Set during the 1980-1982 uprising of Sendero Luminoso (Shining Path) in the Andes, the film explores the trauma experienced by the women raped by members of the Maoist group. The film is an attempt to catalogue and explore trauma and testimony and relies heavily on contemporary psychoanalytical trauma theory, including that of Jean LaPlanche and others, and posits that trauma is passed from the raped mothers to their newborn babies through the act of breast feeding. Already the film has received the prestigious Golden Bear award and FIPRESCI Prize from the Berlin Film Festival. (source IMDB)

From Europe, Un Prophète and The White Ribbon received nominations. Un Prophète is the French selection and is directed by Jacques Audiard. The film follows the life of Malik El Djebena who is sentenced to prison for six years. Although he is originally illiterate, he learns how to read and write under the tutelage of a Corsican Mafia group and through various missions and murders he eventually gains independence from the Mafia. The film already holds the Grand Prix Award from the Cannes Film Festival, Best Film Award from the London Film Festival, and Prix Louis Delluc, a French film award. (source IMDB)

Das weisse Band (The White Ribbon), on the other hand, is the project of Michael Haneke, an Austrian filmmaker. The movie is set in the village of Eichwald, Germany, between 1913 and 1914 (the eve of WWI) and follows the lives of the Protestant villagers ruled by a puritanical pastor. Strange things begin to occur in the village and the tension between local leaders — the pastor, the baron, the schoolteacher, and midwife — heightens as strange and brutal events occur. At the Cannes Film Festival it won the Palme d’Or and FIPRESCI awards and later the FIPRESCI Grand Prix award for best film of the year. At the European Film Awards, the movie took home Best Film, Best Director, and Best Screenwriter. Regarding the Academy Awards, there has been some tension due to the fact that the film was submitted by Germany although the writer-director is Austrian. (source IMDB)

Overall it looks like the competition is going to be stiff in the Foreign Language category and I can’t wait to find subtitled copies of the films.

Foreign Language Film From A to Z
Beyond Words contributors list their all time favorite foreign language films in this alphabet meme style post.