Posted by Maria Khodorkovsky in Interpreting, Language and Culture, Translation on May 12, 2016 1 Comment 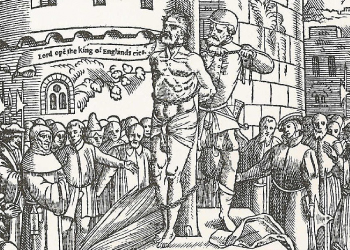 From the Tower of Babel to the Age of the Internet, translators and interpreters have had a seat at the table in every major event in history. And yet, by virtue of the very role they play in enabling other parties to communicate, these language professionals seldom occupy the same space in history as their words and works. Read on to learn more about the development of one of the world’s oldest professions in the West.

Pope Damascus I commissions biblical scholar and ascetic priest Jerome to produce a revised Latin Bible. The Vulgate (from the Latin vulgata, meaning “commonly used”) becomes the preferred text of the Roman Catholic Church for centuries to come. Today, Saint Jerome is held as the patron saint of translators and scholars.

Geoffrey Chaucer is introduced to the works of Francesco Petrarch and Giovanni Boccaccio on a trip to Italy. While the author of the Canterbury Tales was not primarily a translator, much of his great classic was adapted from the writings of his Italian contemporaries. An English poetic tradition of borrowing and adapting older texts would be spawned from this trip.

La Malinche begins interpreting for Hernán Cortés during the Spanish conquest of Mexico. The young Aztec woman who would become translator and guide for the Spaniards learned a number of native languages after being sold into slavery following the death of her father. Her nearly decade-long role as an interpreter is referenced bitterly in popular culture, where she is commonly portrayed as a traitor with a lust for sex and riches. This enduring reputation underscores the complex nature of working as a liaison between opposing groups with conflicting goals.

William Tyndale is arrested and jailed for one year prior to being executed for heresy. Tyndale was a key figure in the Protestant Reformation, and it was precisely his English translation of the Bible that led to his untimely end. The English scholar’s work, however, provides much of the backbone for the King James Bible, and is widely regarded as the first instance of biblical translation in English that draws directly from Hebrew and Greek texts.

Ovid’s Epistles, an English translation of a number of the Roman poet’s verses, is published with a forward by John Dryden. In it, Dryden popularizes the approach in translation theory to distinguish between three types of translation: metaphrase (following the text literally), paraphrase (adhering to meaning rather than exact wording), and imitation (reconstructing the text with creative license). It was the ancient Greeks who first discussed these modes of translation, but it was Dryden who ushered them into modern translation theory.

The Nuremberg Trials mark the beginning of simultaneous interpretation as the standard for diplomatic conferences. With the exception of the 1927 International Labour Conference in Geneva, interpreters had worked consecutively, listening to a speech and reproducing it in the target language in manageable chunks. After World War II, however, time was of the essence, and the goal of conducting “fair and expeditious trials” led to interpreters using headsets and microphones to work almost in real-time.

The image above is a portion of the woodcut depicting William Tyndale’s burning at the stake, from Foxe’s Book of Martyrs (1563).