7 Questions to a Linguist: Bernard Comrie Explores World Languages to Answer the Unanswerable

Posted by Maria Khodorkovsky in Language and Culture on March 8, 2016 6 Comments 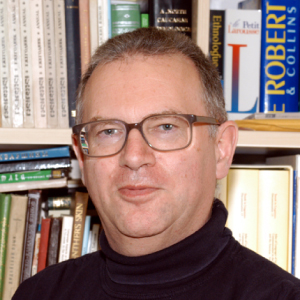 In today’s 7 Questions to a Linguist, we look at the juncture of human history and language development with Dr. Bernard Comrie. Dr. Comrie served 17 years as the head of the Department of Linguistics at the Max Planck Institute for Evolutionary Anthropology and currently holds the position of Distinguished Professor of Linguistics at the University of California, Santa Barbara. His research on indigenous languages, from the Caucasus to Papua New Guinea, sheds light on the circumstances that gave rise to language as we now know it.

When I was an undergraduate taking a course on the history of the English language, it was of course mentioned that England had shifted from being a Celtic-speaking country in Roman times to being Germanic-speaking. I ventured to ask the question whether this was because Germanic-speakers had physically displaced the existing population, or whether large swathes of the Celtic-speaking population had shifted to Old English. The instructor’s response was: We don’t know, and we never will.

But the question kept nagging at me, and when the development of collaborative projects between linguists and population geneticists started offering possible answers to such questions in the late 20th century, I immediately accepted the challenge of the new paradigm, leading to my years at the Max Planck Institute for Evolutionary Anthropology in Leipzig. I was even able to incorporate this interdisciplinary approach into my work on the Haruai in Papua New Guinea, where a combination of linguistic, anthropological, and genetic information suggests a lowland origin for this now highland people.

If one excludes the very beginning of my career, when I worked on the generative grammar of Russian, my main research area has remained constant: the use of broad cross-linguistic data in order to gain a firmer understanding of the phenomenon of human language. In the early days, I hoped to be able to answer questions about what is possible and what is impossible in human language. But statistically, in the absence of instances of a particular phenomenon there is usually no way to determine whether this is due to impossibility or rarity. So now I have shifted more to trying to understand what combination of historical, social, and cognitive processes have shaped the distribution of linguistic variants across the languages of the world. And rare phenomena, like different verbs ‘to give’ depending on whether the recipient is me/us/you or she/he/them, continue to fascinate me!

3. Which moments have frustrated you the most throughout your career?

I think the single thing that most continues to frustrate me is the low esteem in which linguistics and linguists are held in interdisciplinary endeavors. When geneticists, archeologists, and linguists are working together, if one set of conclusions is likely to be dismissed as least relevant, it is nearly always the contribution of linguistics. There are of course limitations on what we can reconstruct about the past using linguistics, and some linguists have not done the field a favor by making unjustifiable claims going beyond this. But linguistics also has solid results that others ignore at their peril.

4. Which of your professional achievements do you believe will have the most lasting impact on the field of linguistics?

This would be the insistence that, in order to understand Language as a general human capacity, we need to investigate a wide range of individual languages (the typological or cross-linguistic approach). When I started working in syntax in the late 1960s, it was still fashionable to claim that the best progress could be made by studying one language, or perhaps a small number of languages. (Interestingly, the situation was almost the opposite in phonology.) Now linguists of many different persuasions acknowledge that linguistics must account for cross-linguistic variation and that this requires attention to a much broader range of languages.

I’d like to go down as having made a serious contribution to the documentation, perhaps even the preservation, of endangered languages. Language endangerment is a major social and scientific issue, both leading to societal problems of alienation and depriving science of access to the widest possible range of cross-linguistic variation. Estimates of the number of languages that are endangered that seemed hopelessly pessimistic a generation ago now seem wildly optimistic.

6. Historically, what do you see as two or three of the biggest events that have shaped the development of human language?

I think that the biggest single event since the appearance of human language has been the development of “displaced” communication, i.e. communication that is not face-to-face. This gives rise to new challenges not present in face-to-face communication, such as the need for greater clarity given that the speaker/writer cannot expect feedback from the audience.

While we usually associate this with the development of writing, and writing is certainly a major factor in the spread of displaced communication, it must also have developed quite early as humans started creating legends to be passed on to future generations. In the modern world it has also taken off through the development of sound recordings, and through access to popular written communication media like SMS/text messages. My fieldwork in Papua New Guinea in the 1980s was an eye-opener here; the Haruai then numbered about 1000, and communication was almost exclusively face-to-face within a community where individuals shared much more common knowledge than in a speech community of millions.

7. Are there any uncomfortable or off-putting truths that you have uncovered in the process of researching and writing about language?

In working on the linguistic contribution to the study of prehistoric population movements and contacts, whether alone or in combination with other disciplines such as archeology and population genetics, one sometimes comes to conclusions that are at variance with the community’s own perception of its past, for instance as told in legends or even in religious works. When such disagreements work their way into arguments about, for instance, land rights, then real practical ethical issues can arise (though I note that things can also work in the opposite direction – in many parts of the world, linguists have contributed substantially to indigenous land right claims).

My own view is that in general one simply has to tell the truth as one sees it, noting alternative viewpoints, since a truth now hidden and later revealed is likely to be even more dangerous than a truth never hidden.