Posted by Jes Gearing in Etymology, Language and Culture on September 9, 2009 0 Comments 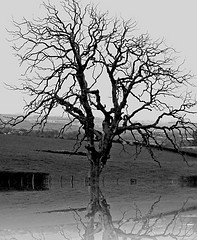 Today marks the first unofficial day of Fall and where I am, at least, the weather is starting to cloud up and cool off a bit and the kids are back in school. To celebrate the close of summer, the New York Time’s Gail Collins, wrote a summer quiz—what interesting and salacious newsworthy tidbits happened this summer and do we, readers, remember them? The quiz kept current events light—from the armed and costumed political protestors to the ridiculous quotations of certain politicians—but the thing that stuck out the most to me was Collins’ characterization of the season: ghoulish.

Ghoulish—that’s normally a word I associate with autumn, October in particular, red and orange leaves and seven year olds running around door-to-door begging for the candy that we freely give. Yes, Halloween’s goblins and ghosts are ghoulish, but are Sarah Palin’s linguistic blunders or certain governors’ extramarital activities?

In order to determine the rightness of the word ghoulish for Summer 2009, I turned to my trusty OED. After all, if the OED can’t sort matters out, what can? Ghoulish, of course, is an adjective that stems the noun ghoul, “An evil spirit supposed to rob graves and prey on human corpses.” Interestingly, ghoul is from the Arabic ghul (the “U” has a straight line over it—can’t find the symbol on my computer) and first appeared in the English language in the late 18th century in Beckford’s short novel Vathek, “All the stories of malignant Dives and dismal Goules thronged into her memory.” In the Arabic, ghul comes from a verbal root meaning “to seize”—hence the connotation of a spirit that robs, that seizes, human corpses. Ghoulish, therefore, means something suggestive of a ghoul, or, according to Webster’s, something “shocking or repulsive”—as in a ghoulish person would be interested in matters shocking or repulsive. Strangely, it’s hard to pin down an exact definition of the word. Most sources seem to agree on ghoul but not on ghoulish—and the move from noun to adjective is messy with multiple meanings.

I suppose, given Webster’s definition, that ghoulish can imply that which is shocking or repulsive, in addition to that which is suggestive of a body snatcher. The summer’s events were certainly shocking, to some degree, but were they more so than usual? Sarah Palin’s resignation, Mark Sanford’s “hiking trip on the Appalachian Trail,” and Michael Jackson’s sudden but not so unexpected death were certainly interesting stories, but I’m not sure if they were exactly ghoulish. Certain words ought to keep their weight; let’s keep ghoulish for the truly sinister and freaky.