The Air up There: Elevation and Phonology

Posted by Maria Khodorkovsky in Language and Culture on March 21, 2018 0 Comments 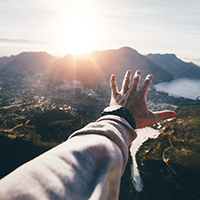 Imagine someone running up three flights of stairs to convey some astonishing news to a friend.  As soon as the excited speaker opens his mouth to talk, the words tumble forward in gasps and bursts, punctuated by pauses that allow him to catch his breath.  Only after filling his lungs with enough air can the individual continue to talk in a normal manner.

This everyday phenomenon may have far-reaching implications for the formation of language: the scarcity or abundance of breathable air in a given location could attribute to an individual language’s phonology.  Previous studies, such as those published in PLOS ONE, an open-access journal from the Public Library of Science, sheds light on this fascinating correlation between geography and phonology.  Spearheaded by University of Miami researcher Dr. Caleb Everett, an anthropological linguist who examines the effects of language on cognition, the study positions 567 languages on a coordinate plane.  When that grid is superimposed on a map of the world, certain phonological trends and tendencies become apparent.

The most salient linguistic information found by Dr. Everett and his team of researchers centers on altitude.  In areas of the world where elevation exceeds 1500 meters above sea level, languages that include ejective consonants were found to be more common.  Ejective sounds, unlike aspirated ones, require the speaker to close the vocal folds so that the vocal cords do not vibrate.  The English language lacks ejective consonants, but audio examples can be found here.  According to the study’s findings, even though only about 15 percent of the world’s inhabitable surface area is considered high-altitude, a full 62 percent of languages with ejectives (57 of the 92 examined) are found in those areas and the 200 km surrounding them.  By drawing the radius slightly wider to 500 km, researchers pinpointed 80 of the 92 languages that utilize ejectives, or 87 percent of languages studied.  Only 20 percent of languages without ejectives (96 of the 475 studied) were found to be located in high altitudes.

Dr. Everett and his team hypothesize that biological necessity may account for these results.  By holding puffs of air in the mouth rather than drawing them from the lungs, speakers who use ejective consonants conserve the limited amounts of breathable air available to them.  Surrounded by an atmosphere that is less dense than that of their low-elevation counterparts, the people of the Andes, Caucasus, and southern African plateau, among others, can mediate the rate of water vapor loss through speaking.  While this theory represents one of many attempts to explain the nature of linguistic development, it provides yet another reminder of the biological factors at play in the evolution of language.