Posted by Maria Khodorkovsky in Language and Culture, Uncategorized on December 12, 2011 0 Comments 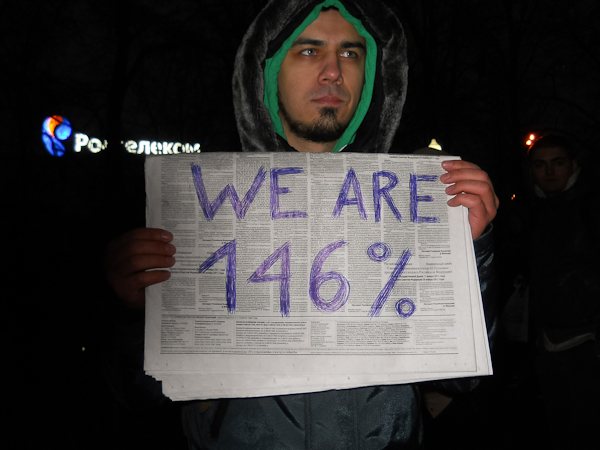 In the days leading up to the massive protest at Moscow’s Bolotnaya (“Swampy”) Square, numerous blogs, tweets, and posts across the city called for a careful, civil, peaceful gathering of tens of thousands of Russians fed up with their government and electoral system. A common trope held that revolution in Russia has had and can have horrific repercussions. The people have seen their revolts herald political movements worse than the ones that preceded them, and they were not keen to repeat that mistake. The people treaded softly, spoke gingerly, and made modest (by Western standards) demands: Annul the election results and hold a new election, have electoral commission chief Vladimir Churov resign, and free the scores of political activists arrested as a result of protests held earlier in the week. Some also called for a Russia without Putin.

Not since the early 1990s has Russia seen demonstrations on such a scale. Talk of rigged elections and federal corruption are not novelties here, but until now, most Russians had resigned themselves to powerlessness against an unassailable system. The Levada Center, one of Russia’s largest non-governmental polling and analytical organizations, published data earlier this year suggesting that 62 percent of respondents believed that the 2007 elections were rigged in favor of United Russia, the ruling party. Yet 2007 did not see tens of thousands of people organized in peaceful protest. The December 4th elections represent what many observers and experts believe to be a point of no return for the Russian ruling elite; concessions, however small, will need to be made.

Although numerous stumbling blocks were tossed in front of the protest’s organizers—including scheduling important exams for schoolchildren and university students on Saturday afternoon and forcing a change of venue from Moscow’s Revolution Square to Bolotnaya Square, an area far less suited for large gatherings—the protest began punctually at 2:30 pm and ended just as punctually at 5:30 pm. It remained non-violent, non-aggressive, and even the rapport between demonstrators and police was civil and cordial. For most of the three hours, the adolescent police officers stood scratching their whimpering, muzzled dogs and looking bored. The rumored instigators—people purportedly paid by the ruling party to taunt and jeer and provoke others into a state of angry disarray—were nowhere in sight.

As the demonstration ended and snow began to cover the ground, protesters trickled out of the square, across the footbridges, flags slapping in the wind as the nationalists, as the communists, as the liberals—as representatives of every underrepresented party—headed home, pausing only to trample a United Russia poster left torn and filthy on the muddy ground.