Posted by Jes Gearing in Etymology on August 25, 2009 0 Comments 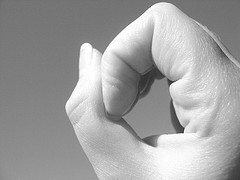 Four hundred years ago today (August 25), Galileo Galilei (Galileo di Vincenzo Bonaiuti de’ Galilei) demonstrated the use of a telescope to the Venetian senate. His telescope, a simple leather tube with lenses at either end (it magnified objects by 9x) was not the first, a Dutchman named Hans Lipperhey had filed a patent the previous year (1608) and earlier in the summer of 1609 a Brit, Thomas Harriot, had made telescopic observations of the moon. Galileo Galilei, however, was the first to popularize the scientific instrument.

Over the course of his life, Galileo showed that the moon was pocked with craters and peaks, discovered the moons of Jupiter, revealed thousands of stars in the Milky Way, and catalogued sunspots on the Sun (among so many other accomplishments). Most famously, his data supported the Copernican view of the universe which stated that the Sun, not Earth, was the center of the universe. Declared a heretic by the Catholic Church in 1632, Galileo died under house arrest in the city of Arcetri in 1642.

Galileo is considered the father of modern astronomy, a scientific discipline as old as humanity itself. Derived from the Greek words astron (ἄστρον), “star”, and nomos (νόμος), law, astronomy literally means “law of the stars. According to the Oxford English Dictionary, astronomy is defined as “The science which treats of the constitution, relative positions, and motions of the heavenly bodies; that is, of all the bodies in the material universe outside of the earth, as well as of the earth itself in its relations to them.” Although early civilizations mapped and charted stars and astronomical phenomena visible to the naked eye, modern astronomy was not established until the rise of the telescope.

Although the modern astronomer tends to abhor the concept and practice of astrology, the two disciplines share a common background. Also from the Greek root astron, (ἄστρον) “star,” and logia, (-λογία )“logic,” astrology was originally divided into two categories: Natural and Judicial. Natural astrology was the “calculation and foretelling of natural phenomena, as the measurement of time, fixing of Easter, prediction of tides and eclipses; also of meteorological phenomena.” This discipline was rendered obsolete in the 17th century when the study of the regular physical phenomena of the universe (outside of the Earth) was transferred to astronomy. Judicial astrology, on the other hand, is “the art of judging of the reputed occult and non-physical influences of the stars and planets upon human affairs; star-divination, astromancy” and is the only working definition of astrology today.

Without Galileo who knows how long it would have taken for Copernicus’ layout of the universe to be accepted or for modern astronomy to have discovered the hundreds of extra-solar planets that we have today? The distinction between astronomy and astrology might have been even more confusing for school children (I had a hard enough time with it, but imagine if astrology stood for both and astronomy didn’t exist) and our logic concerning the stars might have been as illogical as it was back in the 15th century.