Posted by Jes Gearing in Interpreting, Language and Culture, Translation on July 24, 2009 1 Comment 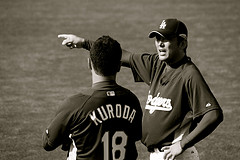 Baseball is the all-American sport, right? When I think of the game I picture muggy summer nights, hot dogs, and lukewarm beer (served at a premium price, of course). What I don’t usually think about is translation—Japanese translation, to be specific. If you’re a Dodgers fan, however, translation is front and center regarding your team. Hiroki Kuroda, the Japanese pitcher drafted last year, speaks virtually no English and relies completely on his interpreter, Kenji Nimura.

As a sport, baseball possibly evolved from the 14th century bat and ball game called la soule, and over the years it transformed in Britain and eventually North America. By 1856 baseball had become the national craze in America and in 1876 the National League was formed. I’m sure you can figure out the rest of the genealogy without too much imagination.

Japanese baseball, or Nippon Professional Baseball (NPB) as it’s referred to in Japan, however, is perhaps an even bigger craze than its American counterpart. The first baseball team, Greater Japan Tokyo Baseball Club, formed in 1934 and the NPB was organized in 1950. Currently twelve teams make up the NPB which is structured into two leagues—the Central League and the Pacific League—and fans are intensely loyal to their home teams. Chants and songs constantly evolve for each team depending on star players and game locations and bars often serve drinks on the house when its favorite team wins. NPB fans go all in for each of the 130-140 season games.

With NPB so firmly established in Japanese culture, it’s not surprising that American teams recruit from the country. Communication with Japanese recruits can be tough, especially in the case of Kuroda who speaks very little English. Kenji Nimura, his interpreter, explains that “You speak three languages but you don’t speak baseball until you get this job. Last year I made a dictionary for myself based on a lot of advanced scouting reports, just picking out all the baseball words I wasn’t really familiar with. And I go through it every time before I go to a pitcher’s meeting because it’s a totally different language.”

Only this season did the MLB (Major League Baseball) allow interpreters to sit on the bench, a rule which gives Kuroda open access to Nimura and, in turn, access to the coaches. Although it seems like pitchers don’t use any form of communication other than their fingers, the Dodgers are hopeful that MLB rules will allow an interpreter at the pitchers mound.

So translators and interpreters, keep your eyes peeled for MLB jobs—I bet the pay isn’t bad. Given the $35.3 million contract offered Nimura, I would wager that Kenji Nimura’s paycheck isn’t too shabby when the happiness and communication of the pitcher is at stake.

For the full article, go here.