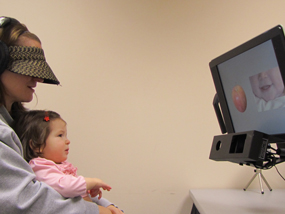 A recent study conducted by University of Pennsylvania psychologists Elika Bergelson and Daniel Swingley may show that the first signs of language recognition in infants occur earlier than has initially been believed. The study tested language comprehension in 6- to 9-month old infants by recruiting caregivers to bring children to the lab to complete a set of two experiments. In the first, caregivers wore visors and repeated basic sentences like “Where is the apple?” while the researchers monitored the infants’ gaze through eye-tracking software. The infant was presented with two images while the eye-tracking software measured visual response. In the second experiment, the images on the screen were presented in context – for example, a number of different foods on a table or a human figure instead of just the part of the body that the caregiver stated.

In both experiments, studying a total of 33 infants, researchers found that infants focused more on the image that was named than on surrounding pictures. These findings seem to indicate that, even before infants are able to form words, they can correctly associate certain sounds with their meanings. Surprising and intriguing, these findings run counter to the widely-held notion that infants do not begin to associate words with their meanings until closer to 11 months. While they are able to grasp certain aural aspects of their native languages before that age, 6- to 9-month old infants are typically referred to as “pre-linguistic.” This study, however, implies that there is a burgeoning understanding under the surface. “I think this study presents a great message to parents,” Swingley commented. “You can talk to your babies and they’re going to understand a bit of what you’re saying. They’re not going to give us back witty repartee, but they understand some of it. And the more they know, the more they can build on what they know.”

—
Photograph: A baby participates in the study of language acquisition. Courtesy of the University of Pennsylvania.