Bento: The Japanese Art of Lunch 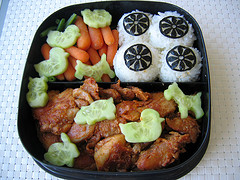 Over the past year or so I’ve noticed a strange phenomenon: people are showing up in cafeterias and break rooms carrying tiny plastic boxes or tins filled with elegantly arranged or cutely flourished lunch items. Their sandwiches may look like mice one day, cats another; the fruit resembles a bouquet of flowers—everything has a cup or a slot or a handmade wrapper. It’s a little disconcerting, I’ll admit, when someone bites off the cat ears of their carrot, but it’s also comic and cute. For some reason, the Japanese bento is taking over America.

Bento (弁当 or べんとう) is the art of arranging one’s lunch. A single-portion meal, a Japanese bento typically contains rice, fish or meat, and one or more pickled or cooked vegetables. While stores (anything from a train station vendor to a grocery store to an actual bento store) often carry bentos, the bento is most often associated with the homemade, with the time-intensive process of slicing, shaping, and packing a single meal at home to take to school or work. 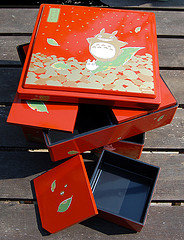 The bento dates back to the Kamakura Period of Japanese history (1185-1333) when a type of cooked and then dried rice was developed (hoshi-ii, 糒 or 干し飯). Hoshi-ii , literally meaning “dried meal,” can be eaten as it is, dried, or rehydrated in water. Then, during the Azuchi-Momoyama Period (1568-1600), lacquered wooden boxes similar to the ones used today for the modern bento were produced for use at tea parties called hanamis. During the Edo Period (1603-1867), the bento became more refined, as travelers began to create koshibentō (腰弁当), the “waist bento,” which consisted of several onigiri (rice balls) wrapped with bamboo leaves or in a woven bamboo box. By the 20th century during the Taishō period (1912 to 1926), aluminum boxes replaced the traditional wooden boxes. Social issues arose with the bento—a bento often signaled a wealthier family, so there were movements to abolish the bento in schools—and after WWII the bento practically disappeared. Instead of a carrying a bento, school children identified themselves by uniforms. During the 1980s, however, the bento began to gain popularity, and the boxed lunch’s popularity has soared in the 21st century.

The arrangement of the bento is called kyaraben (キャラ弁), or “character bento.” Kyaraben features food shaped or decorated to look like people or characters (often animals) from popular culture. This style of bento arrangement was devised in order to encourage children to eat varied and nutritious meals—after all, who wouldn’t eat a rice panda or a Hello Kitty sandwich?—but now there are national, and probably international, contests awarding prizes for the most original and most intricate bentos.

Another type of bento is the ekiben (駅弁)or “railway boxed meal.” These specific bentos, as obvious by the name, are sold in train stations and on commuter trains. The meals are composed of the traditional bento elements—rice, fish or meat, and vegetables—but are packaged in a disposable container. One type of ekiben is the Makunouchi (幕の内), the “between-act bento.” It consists of fish, meat, pickles, eggs and vegetables along with rice and an umeboshi, a pickled ume fruit. The name “makunouchi” dates back to the Edo period (1603-1867) when the bentos were served during the intermissions of traditional plays. The bentos, however, are now common at train stations as a quick “in-between meal” that can be purchased on the go. 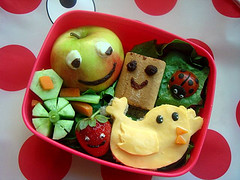 Like many aspects of Japanese culture, particularly contemporary fads (anime, Hello Kitty, cell phones), the bento has become extremely popular in certain social groups in America (mostly 20 and 30 somethings in urban areas). I’m not sure how many school children are showing up in class with bentos this fall, but I know plenty of adults who spend hours every night fashioning their lunches. It’s the element of surprise, for some—especially mothers packing their child’s lunch (the child never knows what he or she is eating or what it will look like until lunchtime—or the urge to eliminate the brown bag, plain lunch culture we’ve cultivated for so many years. The aesthetic coupled with sustainability, locally grown food, and the recession makes for a pleasant alternative to the peanut butter sandwich and apple of the 20th century. Or maybe it’s just that we can’t deny the appealing nature of anything that is cute. In either case, the newest American fad has a long and rich history.