Beyond Language: The Global Problem of Water Access and Sanitation

Posted by Sarah in Uncategorized on October 15, 2010 0 Comments 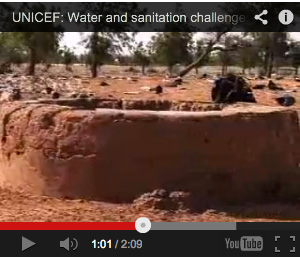 Since 2007, bloggers from around the globe have come together one day a year to post about the same issue in the hopes of sparking a global discussion and driving collective action. Blog Action Day is an annual event held every October 15 that unites the world’s bloggers, and the event’s aim is to raise awareness around an important issue that impacts all people. This year’s topic is Water.

Access to water, water scarcity, and water sanitation are among a long list of critical issues facing both developed and developing nations in the 21st century. Worldwide, almost 38,000 children under the age of five die every week from lack of clean water — and this is only one of the many dire statistics surrounding the lifeblood of our planet. No matter what language you use to describe the compound — ura (Basque), shouei (Chinese), voda (Czech), vaduo (Lithuanian), pani (Urdu) — everyone needs water to survive, and every day thousands of people perish from lack of it. The organizers at Change.org showed a great deal of thoughtfulness by proposing Water as a topic for this year’s Blog Action Day, but the dialogue involving water and human rights is not new.

As early as 1976, the United Nations held the HABITAT 1976 Conference in Vancouver, Canada. The U.N. HABITAT conference aimed to tackle an extremely wide range of issues pertaining to human settlements and the challenges facing a rapidly urbanizing world. Organized as a follow up to the United Nations Conference on the Human Environment held in Stockholm in 1972, topics raised at HABITAT ranged from the problems of inadequate housing, to inequitable economic growth, and uncontrolled urbanization. In opening remarks at the conference, Barbara Ward (a British economist and very early advocate of sustainable development) made an earnest appeal to the General Assembly:

And will you forgive me if now I make one special plea, and this is for the 40% percent of the people in this world who haven’t got clean water. If one thing could sweeten the world and the world’s imagination, it would be if from HABITAT came out a resolution that by a specific date, the most undignified aspect of human living, and I can tell you what it is — it’s running at both ends, that’s what it is — if you could get rid of that, what you would have done for human happiness and dignity would be absolutely incommensurate with anything else we are talking about.

Since the 1970s, there have been many technological and social advancements with the goal of providing clean water to low-income populations. Look no further than a United Nations General Assembly declaration made fewer than three months ago. The U.N. General Assembly declared clean drinking water and sanitation a human right — a resolution that would have certainly delighted Barbara Ward, even if it did occur more than 30 years after she proposed it. The Assembly concluded that clean water is “essential to the full enjoyment of life and all other human rights.”

A great deal of activity in the advancement of water and sanitation for the poor has come from the field of architecture — and not just in the form of buildings. South African architects Hans and Pieter Hendrikse invented the Q-Drum in 1993 as a response to the incredibly time consuming task of fetching water performed daily by many women throughout Africa — who often dedicate up to eight hours per day to this grueling chore. The Q-Drum is a double polyethylene cylinder that is pulled by a rope rather than carried, which results in a reduction of both physical strain as well as travel time. Similar innovations have been introduced and celebrated such as the Hippo Water Roller and the Life Straw, a compact portable water filter invented by Torben Frandsen in 2005.

The importance of these products shows that the traditional roles we play — as architects, linguists, translators, etc. — can always be expanded. Basic access to water and sanitation can fall within the realm of all of our responsibilities. For every small organization developing inventions like the Q-Drum, for instance, there exists a real need for translated instructional and marketing materials. Effectively solving present-day water issues requires the full creative knowledge and participation of a diverse team.

Even more, investments in water supply and access are social and not solely economic investments. Possible benefits from access to clean water range from increased health, self-reliance, and even modernization. When clean water becomes more abundant in a community, factors such as health and education improve and, as a result, productivity increases.

You don’t have to be an architect, designer, planner, translator, politician, or even a linguaphile to make a difference. Below you’ll find a few easy ways to inform yourself on the issues at hand and help in whatever capacities you can:

Sign a PETITION in support of the UN’s life-saving work to improve water and sanitation for billions, and DONATE to help build water wells in developing countries.