Posted by Danielle in Accent Reduction on July 21, 2010 0 Comments 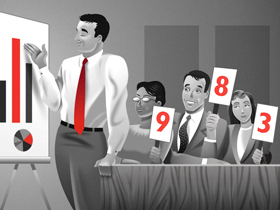 According to a new study just released by the University of Chicago, a foreign accent may undermine a person’s credibility. Participants who took part in the study were asked to rate the truthfulness of statements made by both native and non-native speakers of English.

The researchers found that truthfulness ratings were lower for statements made by non-native speakers than those made by native speakers. The severity of a person’s accent also affected the score; statements made by speakers with heavier accents were rated as less truthful than those with milder accents. “Because an accent makes a person harder to understand, listeners are less likely to find what the person says as truthful,” researchers concluded.

To help individuals reduce their accents and be better understood by native English-speakers, ALTA provides a variety of Accent Reduction Training programs, ranging from self-study to instructor-led training for individuals as well as corporate groups. These programs provide maximum efficiency and effectiveness in reducing one’s accent because the learner is able to focus only on the sounds that he or she needs to correct in order to sound more like a native English-speaker. An initial assessment pinpoints the individual’s particular problem areas, and provides a rating according to whether each is a minor, moderate, or a major problem area. The learner can then tackle those issues in an organized sequence to maximize his or her progress. ALTA’s methodology uses a series of steps to help the learner understand the right way to produce a sound, and then assimilate that sound into his or her natural speech. Further support is offered in the form of online materials that can be used to practice in between classes.

Changing one’s accent is by no means an easy task; an accent is essentially a habit of how you speak. The objective of an accent reduction training program like ALTA’s is to break an old habit of speaking and replace it with a new one. However, it is a task that can be accomplished with practice, and it breaks down a significant barrier for non-native English speakers.