Catcher in the Rye in Translation

Posted by Jes Gearing in Language and Culture, Translation on January 29, 2010 0 Comments 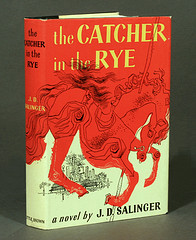 When news of J.D. Salinger’s death was reported late Wednesday afternoon, I was surprised, but then not. Despite being one of the most recognized American authors of the twentieth century, Salinger was also one of the most reclusive. After being thrown into the limelight in 1951 with Catcher in the Rye, Salinger moved to a 90 acre home in Cornish, New Hampshire and, after an unwelcomed newspaper article was published about him by a group of high school students he had befriended, he erected a 6 ½ foot tall fence around the perimeter in order to keep people out.

Even though few of us knew anything about his failing health or major accidents, Salinger was 91 years old, and 91 is a ripe old age.

Salinger’s most recognized work, Catcher in the Rye, faced issues in translation that still haven’t been resolved today, some fifty-nine years later. According to Bernd Wahlbrinck, an English teacher and Salinger enthusiast living in Germany, the novel was harder to translate into certain languages than others.

He writes specifically of Heinrich Boell’s German translation originally written in the 1950s. Part of the inaccuracies of the translation were possibly due to a lack of proper slang or the cultural taboo around slang—‘that David Copperfield kind of crap’ is translated into ‘David Copperfield Zeug’, where ‘Zeug’ more accurately refers to ‘stuff’ and should have been ‘Scheiss’, but also the:

…weird tendency to translate the past tense into German Praeteritum, which is, however, usually stupid because in colloquial language we just don’t use it most of the time. Thus, in the very first sentence of the novel, it says ‘… was meine Eltern taten…’. Actually, nobody says that, certainly not a kid of 17; we would say something like ‘was meine Eltern (so) gemacht haben’.

In 2003, however, a new German translation was published by Kiepenheuer & Witsch, and the verdict is out on that one, but the first sentence of the new translation seems a bit closer to the original English:

Wahlbrinck’s website contains a plethora of other translations, like the first sentence of the book in Portuguese:

Also, the Dutch translations translate the “you” in the first sentence in various ways: “the first (1958) uses the singular “je”, in the second (1967) “u” is used (same use as in Afrikaanse translation, a language very similar to Dutch), the latest translation again uses “je”. Interesting is that David Copperfield kind of crap is never translated using the name DC. The translation in Dutch is: “van dat soort sentimentele gelul” (that kind of sentimental crap).’

The website is definitely a good read for anyone interested in translation and Catcher in the Rye, and I’m interested in hearing from translators if you all agree with Wahlbrinck’s assessment of the issues surrounding the novel’s translation.