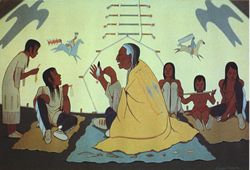 Over the past few years, we’ve written many times about endangered languages and highlighted specific ones like Mecanese and Shiyeyi. We’ve also discussed some staggering statistics: there are 538 critically endangered languages, 502 severely endangered, 632 definitely endangered, and 607 unsafe languages in the world. Still, with all this talk of what is in peril, we’ve spent very little time discussing language conservation and the people who work to save the world’s endangered tongues.

Based on the need for a more user-friendly means to catalogue and access Native American language materials, Arobba built the website as a way for users to collaboratively pass languages from one person to another. Users can upload photos to the website or Facebook page and “tag” them with video files, thus surpassing the written-language barrier many tribes face.

While initially built to preserve the Lakota Sioux language—Arobba’s tribe’s language (that of the Rosebud Sioux), the site has quickly expanded. Dakota and Purepecha are two other languages that have recently appeared on the site, and the implication is vast. In developed societies with indigenous languages, crowdsourcing language—that is, the outsourcing of tasks (in this case, cataloguing language) to a large group of people who collaborate on creating the end product—is easy, and it’s a concept already integrated into the culture. Who in the United States or Europe doesn’t use Facebook or some other social outlet on the Internet? In other areas with less access to technology, it remains more opaque.

Arobba, though, is hopeful for the success of LiveAndTell and other crowdsourced language sites. By lowering the entry barrier—LiveAndTell is open-access and free—anyone with access to technology can participate in the cataloguing of endangered languages. Even the generational gap is less severe in today’s society. With more and more older people accessing the internet, languages can be passed through pictures and audio files to younger, less-exposed generations. And the effect is instantaneous—post the picture, record the word or phrase, and the information is visible for all to see instantaneously. LiveAndTell is global collaborative language conservation for the post-computer, cloud-based world.