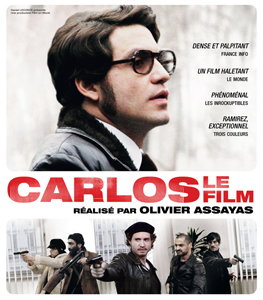 It seems as if foreign language films are the talk of the town this awards season, and for good reason—for the first time in ages, foreign films are being recognized in the United States as some of the most important films being made today. Foreign films, foreign languages, and foreign directors are storming the screen. Perhaps echoing the sentiments of day-to-day film viewers in this new globalized age of cinema, the Academy of Motion Picture Arts and Sciences is nominating top-caliber films in its “Best Foreign Film” category, as well as acknowledging Javier Bardem’s excellent performance with a nod for “Best Actor in a Leading Role.”

One of the surprises so far this award season was Carlos which won “Best Mini-Series or Motion Picture Made for Television” at the 2011 Golden Globes. The fact that it was originally produced for French television rendered it ineligible for an Academy Awards nomination, though it was viewed on movie screens in independent theaters across America. Based on the life and times of the Venezuelan revolutionary, Carlos the Jackal (i.e. Ilich Ramírez Sánchez), the miniseries/film features over eleven foreign languages, as well as a cast headed by Édgar Ramírez as Carlos. Historically, Carlos gained notoriety in 1975 for raiding the Organization of the Petroleum Exporting Countries (OPEC) headquarters in Vienna, and for years after he was considered one of the most wanted international fugitives. Screened at Cannes, the three-part miniseries received numerous accolades and went on to be acquired by the Independent Film Channel (IFC) for U.S. rights and aired on the Sundance Channel and in select theaters.

The fact that Carlos is ineligible for an Academy Award sparked debate among critics—why the exact and sometimes nonsensical rules regarding nominations for the award? A.O. Scott’s piece in the New York Times a few weeks ago sheds some light on the question and also acts as a counterpoint to my assertion that world cinema is earning its due limelight in the American public. “My complaint, really,” Scott writes, “is about the peculiar and growing irrelevance of world cinema in American movie culture, which the Academy Awards help to perpetuate.” He goes on to list the last major foreign films that have gained significant popularity in the United States: Crouching Tiger, Hidden Dragon; Pan’s Labyrinth; The Lives of Others; Girl with the Dragon Tattoo. With such a small list of successes, he argues that “as fashion, gaming, pop music, social media and just about everything else have combined to shrink the world and bridge gaps of culture and taste, American movie audiences seem to cling to a cautious, isolationist approach to entertainment.”

But why exactly these claims? Because the Academy places the strict one-film-per-country nomination rule on foreign entries; because the choice of the final five films is arbitrary and not necessarily the best representation of all nominated films (take for instance France’s 2010 submission of Of Gods and Men which, like the Algerian nominated Outside the Law deals with periods of crisis and revolution in Algeria). Scott argues that his “concern…is more with cultural protectionism—the impulse not to conquer the rest of the world but rather to tune it out.” Cultural protectionism in opposition to, as I argue, a golden age of foreign cinema. We are actually in a period of abundance in regard to world cinema. In my opinion, the quantity of quality foreign films is at its highest point ever. Audiences, however, as urged by the industry, are pushed away from other cinemas and forced to focus on American films. When was the last time you were able to find a foreign film screened in your town (outside of major metropolitan areas like New York City, Los Angeles, San Francisco, etc.)?

The problem may be rooted in overabundance. As Scott notes, “New technologies and traditions proliferate and cross-pollinate so rapidly that even a permanent resident of the international festival circuit would have trouble keeping track of it all.” But the problem also lies in our own lack of initiative to seek out foreign films other than the five the Academy nominates. The impetuous is partly on us, as consumers of film, to break out of the mold of cultural protectionism and edge our way into world cinema—to use the new technologies that are readily available to find the latest in Korean, Serbian, Japanese, and Brazilian film. The Academy Awards serves as a good entrance into a lesser-known cinema, but it remains arbitrary and represents only so much. The rest is up to us.

You can learn more about foreign films currently at the theater by keeping up with our series: Now Playing