Devil’s in the Details: New Book Looks into the World of Pronouns

Posted by Maria Khodorkovsky in Language and Culture, Uncategorized on May 31, 2012 0 Comments 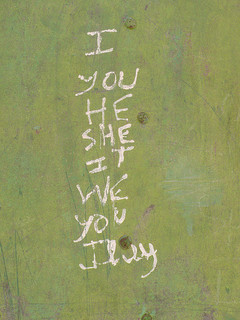 How does a researcher broach the fields of linguistics, psychology, and computer science? Dr. James Pennebaker, Chair of the Department of Psychology at the University of Texas at Austin, does it by plugging text into a computer to attempt to analyze what our use of words reveals about our psychological hardware and modes of thinking. In his new book The Secret Life of Pronouns: What Our Words Say about Us, Dr. Pennebaker zeros in on the smallest, least-thought-about words in the English language – function words like articles and pronouns. In doing so, he discovers a number of interesting correlations between the use of those words and the age, sex, and background of their writers. He even predicts whether or not they are telling the truth.

Scientific American recently interviewed Dr. Pennebaker about his findings, one of the most fascinating of which was the dichotomy of status inherent in the first-person singular pronoun “I.” Apparently, a broad study conducted by Dr. Pennebaker and his students found that people holding a higher position or status, like supervisors vis-à-vis employees and teachers vis-à-vis students, tend to refer to themselves less frequently than do their subordinate counterparts. Tested on his own correspondence, Dr. Pennebaker realized that his e-mails to students had remarkably few appearances of “I”, whereas e-mails to the dean of the college were littered with it. The dean’s e-mails, in turn, had practically none.

Another unexpected and hugely-relevant finding of these studies was a correlation between students’ college admissions essays and their GPAs during college study. Testing across four years and 25,000 students, Dr. Pennebaker found that students who tended to excel in academic studies had used a higher rate of nouns in their essays, rather than verbs, than those who did poorly. Dr. Pennebaker theorizes that this may be due to the use of nouns to categorize and the use of verbs to tell a story. Ostensibly, students that categorize tend to do better academically than the storytellers. If accurate, this notion could have far-reaching implications for both universities and students.

These studies may well have very practical applications, if not now, then in the distant future. Studies have been conducted to determine if there can be such a thing as a linguistic lie detector – a machine that can pick up on the nuances of how people use language to reveal and to conceal the truth. So far, Dr. Pennebaker attests that his preliminary findings have been positive, catching lying in about 67 percent of cases. He does not hesitate to say, though, that a truly accurate linguistic lie detector will not likely be developed in our lifetimes.