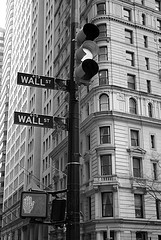 As the financial crisis gains momentum and uncertainty reigns over the markets, we tend to look at stock market behavior as a barometer of the economic environment. After yet another stock roller-coaster day, stockholders are more uncertain about tomorrow. The origin of the word stockholder has an interesting history which dates back many centuries.

The earliest system of recording bilateral exchange was a tally stick system. The technique of using a tally stick to keep track of financial transactions arose in medieval Europe in the 12th century, when King Henry I introduced tally sticks with notches of different sizes to mark denominations. The stick (usually from hazel) was split lengthwise, so that both parties had a complete record of the transaction. Later, to prevent any counterfeit, the two parts of the stick were made different in size: a lending party held the longer part of the stick, called a stock, and the receiving party held a foil, the shorter part.

So, the stockholder was the one who held a wooden stock. The king kept one part of the stick for his records, and the other part was released into the markets to circulate as money. The king also accepted tally sticks for tax payments, which insured their credibility as money. The system was very successful and lasted in England until the early 18th century. In some small European countries, it survived until the early 20th century.

If we were back in King Henry’s times, we might be throwing sticks in order to inject liquidity into the economy. In any case, sitting on our assets would be quite uncomfortable.