Posted by Maria Khodorkovsky in Uncategorized on May 25, 2017 1 Comment 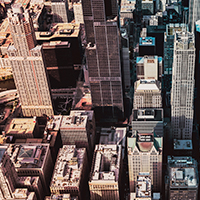 Read on to find out the fascinating and unexpected etymologies of ten of our country’s largest cities.

Atlanta:          Having undergone numerous name-changes – from Terminus to Thrasherville to Marthasville in the 19th century – the city was christened with its current name in 1847.  The name was shortened from Atlantica-Pacifica, which commemorated the completion of the Georgia Railroad.

Boise:              Taken from the French-Canadian boise, meaning “wooded”, the word’s Latin roots can also be seen in the Italian bosco and Spanish bosque, both meaning “woods.”

Chicago:         Like many U.S. cities and states, this name is most likely derived from one of several Native American languages.  Possible options include the Algonquian sheka-ko-heki, meaning “place of the wild onion,” or the Ojibwa shika-konk, meaning “at the skunk place.”

Dallas:            Named in honor of George M. Dallas, vice president under James Polk, the name originally meant “dweller of the house in the dale” in Scottish Gaelic.

Denver:          Originally called Auraria, meaning “golden”, the city was renamed for the 19th-century general James W. Denver.  This surname stems from a location in Norfolk and literally means “passage used by the Danes.”

Philadelphia: Known as the “City of Brotherly Love”, this moniker comes from the Greek philos, meaning “love”, and adelphos, meaning “brother.”

Phoenix:         Named after the mythical Arabian bird that was reborn from its ashes every 500 years, the word most likely shares a root with “Phoenician”, or “purplish red.”  The U.S. city got this name because it was founded at the site of an ancient Native American settlement.

Seattle:           This northwestern city was named after Seatlh, a Native American chief who befriended the city’s white settlers.