Why are Foreign Language Tattoos so Popular?

Posted by Janet Barrow in Language and Culture on February 19, 2019 0 Comments 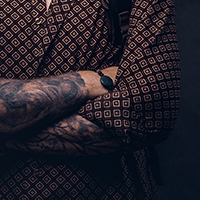 When translations are in the news, it’s rarely for their stunning accuracy. In one of the most recent translation-related news blunders, famous American singer Ariana Grande found herself on the wrong side of viral fame after Instagramming a picture of her new tattoo. When Grande uploaded a photo of the kanji tattoo she got on her palm to commemorate her new hit single, “7 rings,” Japanese speakers were quick to weigh in, letting Grande know that her tattoo was not exactly communicating the intended message.

Grande had left out a key series of characters needed to clearly convey the intended message, and as a result, her tattoo read “shichirin,” which is something along the lines of “barbeque grill.” With the help of a friend, she tried to amend the mistake by adding a new line of characters. But the incorrect placement of the additional characters left her updated tattoo reading “barbeque grill finger.”

From Ancient Greece to Reality TV

Tattoos have been around for thousands of years, and in Western culture, the practice of adorning oneself with foreign language tattoos is nothing new. For a long time, it was believed that Western tattooing practices started around the time of Captain James Cook’s late eighteenth century voyages to the South Pacific, a theory that is supported by the origin of modern European words for tattoo (tatuaje, tatouage, tatuagem), which derive from the Tahitian word ‘tatau.’ Although the growth of print culture at the time of Cook’s voyages may have served to increase the visibility of tattooing, the reality is that Western tattooing actually dates back as far as ancient Greece, and foreign language tattooing was popular with Europeans living amongst Native Americans, as well as sailors, tradesmen, and pilgrims visiting the Holy Land hundreds of years before Captain Cook ever set sail.

Still, up until as recently as the 90s, tattooing was generally associated with specific groups, counterculture, or stereotyped as an act of rebellion. But then, around 2005, something big happened. The first popular reality TV show about tattooing, “Miami Ink,” came out. Within a few years, tattoo artists started metamorphosing into celebrities, a series of spin-off shows, including “LA Ink,” “NY Ink,” and “Ink Masters” had premiered, and “Miami Ink” had been aired in over 160 countries. Tattooing had found its way onto the mainstream map.

Nowadays, 29% of Americans boast at least one tattoo, up from 16% in 2003. For people ages eighteen to twenty-five, that number shoots up to 38%. And as tattoos have become more popular, it follows that foreign-language tattoos have as well. If you walk around pretty much any city in the US on a hot summer day, you’re likely to be bombarded by a barrage of Chinese and Japanese symbols, as well as the occasional Arabic or Sanskrit scripts. And while some tattoo wearers might have verifiable ties to the cultures or languages inscribed upon them, many do not.

So, what makes permanently marking oneself in an indecipherable language so appealing? The most common conjecture might be that a foreign language is able to lend a kind of magic to everyday objects and ideas that our own language cannot. We see this in spoken language all the time. Somehow, ‘carpe diem’ seems to more succinctly and beautifully capture the idea of using time wisely than ‘seize the day,’ ‘touche,’ sounds cleverer than ‘good point,’ and ‘c’est la vie’ gives a scrumptious punch that ‘that’s life’ mysteriously lacks.

This habit of foreignizing as a means of lending depth or beauty exists in many varied permutations across the millennia. Whether you identify with such practices or brush them off as vapid, commodified symptoms of globalization (or cultural appropriation), the human search for significance has long found expression in works of art that try at once to express the known and the unknown. For example, hundreds of years ago, many European and Renaissance artworks were adorned with beautiful Arabic text that, however visually eloquent, was often nothing more than a mash of gibberish.

Analysis and personal opinions aside, it’s a good idea to consult someone who speaks your target language before making a life-long commitment to a symbol that you or your tattoo artist are unable to read. And there are certain pitfalls to beware. For example: name translations. Chinese and Japanese are both non-phonetic languages, meaning that their characters don’t correspond to letters or sounds – instead they are built from radicals, or basic units of meaning that come together to form individual words. For example, the Chinese word for moon combines the radical yuè (月), which means month, with the radical liàng (亮), which means bright. These two signifying concepts come together to mean moon. Since characters don’t correspond to sounds, translations of Western names into Asian languages are often approximations that try to loosely reproduce the sound of a name with a series of characters that –put together – look like gibberish to a native reader.

If that’s not enough to convince you to at least find an artist who knows your target language, you should also be aware that writing Japanese, Chinese, or even Arabic well takes a great deal of practice and precision. Strokes are made in a particular order, and a slight alteration in the angle or thickness of a line can make for horrific penmanship. A pretty common analysis amongst native speakers is that, even when Westerners have tattoos that translate well, they tend to be written in chicken scratch.

One final peril to beware of is backwards tattooing. Lack of familiarity with the language often leads clients or artists to muddle the order of characters or accidentally inscribe the inverse image of a symbol. !ƨqooʜw