Posted by Manny Echevarria in Language and Culture, Translation on January 15, 2009 0 Comments 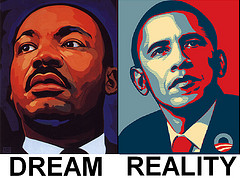 The inauguration of Barack Obama as the 44th President of the United States adds a historically resounding element to this year’s Martin Luther King Day celebration.

King was born on January 15th, 1929 in Atlanta, Georgia at a time when the South, and the Nation as a whole, suffered greatly from the violence and oppression caused by racial inequality and segregation. King became an activist preacher and was among the civil-rights leaders who organized the March on Washington in 1963, where he delivered his “I Have a Dream” speech.

During this time of year when Americans reflect on MLK’s contribution, and especially this year when President Obama delivers his inaugural speech within view of the King Memorial, ALTA wants to help spread the word to multilingual readers with the MLK Translator Challenge.

In many ways, the political groundwork and rousing speeches of civil rights leaders like Martin Luther King cleared the pathway for the inauguration of our nation’s first African-American president next week. Moreover, Obama is a kind of heir to the handful of American leaders (Lincoln, Roosevelt, King) who effectively harnessed the power of language to engender political change.

ALTA wants to help spread the message this MLK day by asking translators and multilingual bloggers around the world to participate in the MLK Translation Challenge.

To participate, simply translate the following excerpt from MLK’s “I Have a Dream” speech into your target language, and post it on your blog or web page with the Dream to Reality Badge (pictured above).

You can grab the Dream to Reality Badge with the following code:

“I HAVE A DREAM” EXCERPT:

Dream to Reality Badge by DoubleFraser

ALTA Language Services is a comprehensive translation services provider. During the 2008 presidential campaign, ALTA was among the first translation agencies to join a group called Translators for Obama whose aim was to translate Barack Obama’s speeches in a wikisource style so that multilingual voters and interested people around the world could read the campaign’s message in several different languages.