Posted by Jonathan in Translation on February 20, 2009 0 Comments

A recent TechCrunch article penned by Leena Rao posed the common question: How does one say Vimeo in French?

The translation left Rao’s readers grinning, but it was unfortunately much to Vimeo’s chagrin: Google Translate thinks ‘Vimeo’ is pronounced ‘youtube’.

When prompted to translate the English sentence ‘videos on Vimeo’ into French, Google produced: ‘des videos sur YouTube’. According to Rao, only when Vimeo is submitted as a singular word, does Google correctly keep it as Vimeo in French translation. However, when it is incorporated into a sentence, Google chooses to change Vimeo into YouTube. 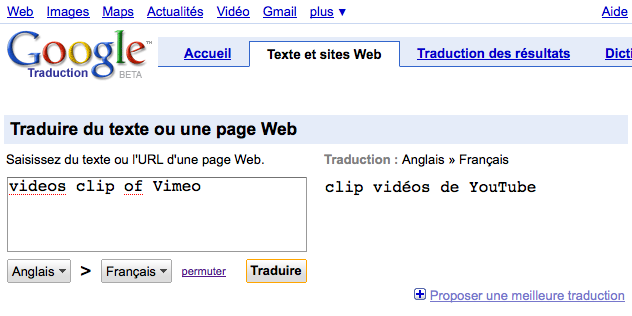 According to Nick from Many Body Theory, Google arrived at this using Statistical Machine Translation (SMT). In a comment on the TechCrunch article, Nick suggested that SMT is more complicated than just casting it off of Bayesian (as another commenter had previously).

For Google, SMT is a lens through which it determines if certain words can be used interchangeably. Nick broke it down as follows:

In the most basic terms, it notices that many times when someone writes a sentence about YouTube, the same type of words/phrases around it are also common for Vimeo. It is a very cleaver method of using user generated content to come up with translation of texts that normally dictionaries would not be able to provide.

Well, according to bloggers at Search Engine Roundtable, this nearly landed Google with accusations of libel and slander from Andrea Allen, Vimeo’s Community Assistant, in their Google Groups forums.

Google Translate has since ceased translating Vimeo into YouTube.

Google Translate poses a particular threat of mistranslation that other arguably less advanced free online translation services do not.

The potential for malicious manipulations of the “suggest a better translation” function could, ostensibly, grant a user the power to influence the translation of any word with a False Friend indeed .

Irrefutably, Google Translate is a convenient tool. But it is by no means a dependable mechanism for translating brands across languages and cultures. In fact, there is no such mechanism. Such endeavors require translation and localization services performed by experienced human translators.