Posted by Jes Gearing in Language and Culture on December 11, 2009 1 Comment 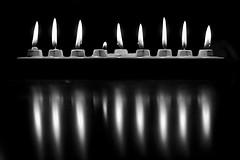 Today at sundown marks the beginning of Hanukkah, the eight day Jewish Festival of Lights. Instituted to celebrate the rededication of the Holy Temple in Jerusalem, the festival is observed by lighting the eight candles in a menorah, eating, the recitation of scripture, and the giving of gifts. Coincidently it’s also one of the primary holidays during the month of December, along with Christmas, but it does hold a more marginalized role in popular culture than the latter. One of the more confusing elements of the holiday (for someone who doesn’t celebrate it), is the English spelling of the name — is it Hanukkah or Chanukah or Chanukkah or something else entirely?

The name of the holiday, חנוכה, originates in the Hebrew verb חנך, “to dedicate” — a signification that makes sense since the festival celebrates the rededication of the Temple when the Jews regained control of Jerusalem from the Seleucid empire in the second century BCE. חנך can be broken down into two parts — חנו from the Hebrew word for encampment and כ”ה, the twenty-fifth day of Kislev, the day the holiday begins. Another possibility to the etymology is ח’ נרות והלכה כבית הלל, “eight candles as determined by the House of Hillel,” of which Hanukkah is the acronym for. Apparently a disagreement sprung up between two religious groups as to how to light the candles — lighting all on the first night and blowing one out every subsequent day (Shammai) or lighting one candle per night (Hillel). As we can now see, the official position is that of Hillel.

As for the spelling of the word, Hanukkah or Chanukah or Chanukkah (etc.), back in 2005 on All Things Considered, Robert Segal reported that the main issue behind the spelling conundrum is that certain Hebrew letters simply don’t have an equivalent in English. However, that doesn’t quite explain the popularity of Hanukkah over Chanukah or vice versa. Andy Carvin, in his blog post Chanukah vs. Hanukkah Death Match: the Great Spelling Shift, found out some weird statistics. When Segal reported on the spelling debate, 2.8 million Google hits were for Chanukah where as Hanukkah only logged 650,000. Carvin was interested in finding out if another shift had occurred, or if Chanukah was still more popular than Hanukkah. One year later, however, the number of hits for Chanukah dropped to 3,070,000 while the hits for Hanukkah jumped to 10,200,000. This change Carvin suggests could be accounted for by the use of Hanukkah as the official Wikipedia entry — it redirects you if you type in Chanukah.

Another blogger, however, Balashon — Hebrew Language Detective takes issue with the spelling of Hanukkah.

I’m partial to Chanuka or even Hanuka, but my wife quotes her fourth grade teacher as saying “The one rule about spelling חנוכה – it must have eight letters.” And since shalom bayit (lighting Shabbat candles) comes before the mitzva of publicizing the miracle (lighting חנוכה candles) – see the last Rambam in Sefer Zmanim – I’ll stick with Chanukah.

He also goes on to question the simple etymology I’ve listed above (the popular etymology, at least). Apparently the complications in etymology arise from the root word, חנך. According to Dr. Stefan Reif at Cambridge University, חנך actually means “to begin, to initiate,” not to dedicate. To dedicate, to consecrate for sacred uses is actually קדש in Hebrew and the translation of “to dedicate” in חנך stems from the Latin translation of the Bible, the Vulgate.

Unfortunately, this “to dedicate” vs. “to initiate” debate doesn’t exactly clear up the question of how to spell the holiday. Whether one spells it Hanukkah or Chanukah or Chanuka, I don’t think anyone’s going to get too upset. But, I thought it would be interesting to run some figures like Carvin on the number of Google hits for either word. Like most things these days, popular vote does seem to determine things, at least at the cultural level.

So, here goes: According to Google Insights, a tool that analyzes worldwide Google web searches from all Google domains to compute how many searches have been done for specific terms, most people in the U.S. search for the spelling Hanukkah. It’s interesting to see the regional and quantitative differences for the different spellings, and in the charts below, you’ll notice the spikes that mark the high points for the searches in a given year, which in the case of Hanukkah, of course, happen in December.

The spelling, Chanukah, shows an interesting decline in search over the last few years. In 2004, it was searched at close to the same rate as the now favored Hanukkah, but last year, those search numbers decreased by almost half! These are keywords typed directly into Google’s search field, so Wikipedia can’t be the culprit. Here’s the chart:

The spelling, Chanuka, is not searched as often in the U.S., but it is the spelling that most Google users type when searching from Israel and the Czech Republic.

Here’s how searches for the three spellings break down by nation, and however you decide to spell it, have a happy Festival of Lights!: