It’s Hard to Tie My Shoes

Posted by Stephanie Wiley Cork in Interpreting on September 27, 2017 0 Comments 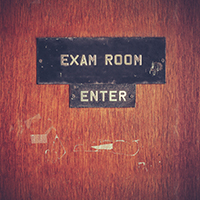 Today I worked with a patient that I’ve seen a thousand times. As a Spanish interpreter, I work with the same patients a few times a week in the emergency room for dialysis. Many of these patients have no health insurance. No documents. Not enough resources to pay the astronomical cost of weekly dialysis out of pocket. They have to come in through the emergency room and wait sometimes for hours before they are taken upstairs to be dialyzed. Sometimes they stay overnight to get dialysis twice in a row.

The doctor had called me to discharge the patient. We were mostly done when the doctor asked one of her last questions. “Do you have any more questions or concerns?”
“Solo la panza,” said the patient, placing his hand gingerly on his stomach. “Just my belly,” I interpreted. We looked down and saw that his belly was swollen. His frame was slight, and his shirt was loose. His abdomen was comparably bigger than the rest of his body, but it didn’t seem like an exaggerated difference.

“Yes, I see that. I haven’t seen you in a few months. Is this more swollen than normal for you?”
“Si, antes yo era flaco como ella.” He gestured at me. “Yes, I used to be skinny like her.”
“I see. And you’ve had a paracentesis before, right?” In this procedure, a needle is stuck into the belly to draw out excess fluid. The way he said yes made me wonder if he’d had it done on multiple occasions.

“We’ll need to do a quick physical exam. Could you lift up your shirt?” said the doctor. The patient settled back into the bed and pulled his shirt up to reveal the swell of his belly hidden underneath. I was surprised by how big it was. He looked like he was several months pregnant. It was so odd to see that shape on a man. His skin was tight and strained and his belly button stuck all the way out like an exclamation point, framed on each side by the suspenders that he was wearing. They sloped over his stomach and connected to the waistline of his jeans. He must’ve worn them out of necessity.

He lifted his head up from the bed, peering over his stomach and said, “Ahora estoy pesando 75 kilos. Si regreso en una semana, voy a pesar 85.” “I weigh 75 kilos now. If I come back in a week I’ll weigh 85.”
“It just keeps swelling and swelling. It’s not so much that it hurts, it’s just that it’s hard to tie my shoes. It’s uncomfortable. Will I always be like this?”

“Well, not after the procedure. We’ll take the fluid off, but then it’ll come back. It’ll swell again, and then we’ll take it off again.” She moved her hands in and out around an invisible bubble to demonstrate this ebb and flow. She explained that this swelling comes from heart failure. When the heart doesn’t pump as it should, it can cause a buildup of excess fluid. An abdomen that is constantly filling and filling and filling with the drip of a tap that won’t close. It’s something he’ll have to deal with for the rest of his life.

As I interpreted these words, I saw his shoulders drop half an inch. He lowered his gaze and there was an almost imperceptible shake of the head. Disappointment. He looked immediately exhausted. He had been hoping for a different answer, but he was gentle in the acceptance of this overwhelming news. He quietly said he had no more questions, and signed the consent forms. He said thank you over and over again both to the doctor and to me. As we walked out of the room, I turned around at the last second, to quickly say “cuidese” (take care) and caught him in a vulnerable moment. He was staring blankly at the floor, processing the news.