Posted by Jes Gearing in Language and Culture on January 28, 2010 0 Comments 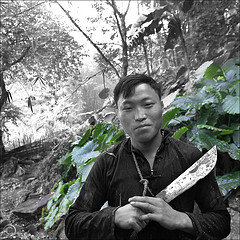 Ever since I wrote about the Hmong language in A Note on Hmong Language and Culture, I’ve noticed more and more news items regarding the Hmong people. Maybe it’s just the kind of situation where the Hmong have always been written about and it wasn’t till I was made aware of it that they seemed to be everywhere, but they have popped up in major news articles several times in the past few weeks. A few weeks ago the news was regarding the forcible repatriation of the Thailand Hmong to Laos, but this time, thankfully, the news is a little lighter: the Hmong in California need hunting rules and regulations translated.

Of all of the translation news bits and cultural issues that I find so intriguing, this one tops them all. The New York Times posted an article on January 27 with the headline For Hmong Hunters, a Guiding Voice in Their New Home. Tying in with my previous article which was spurred by the first English language Hmong cookbook, the article focuses on Mr. Yang, the host of an “all-things-hunting” AM radio program in Sacramento. The reason for a hunting radio show—“In Laos a main source of food was wildlife,” so Hmong immigrants are simply adhering to their old customs and heading outside to find some food.

The radio show (which is in Hmong, of course) educates listeners about the various California rules and regulations regarding hunting—what licenses are needed, how to transport heads to Fish & Wildlife offices, the times of the different game seasons, etc. Hmong from all over the area can call in and ask their specific question which Mr. Yang will answer. The show complements the state-run hunting education program—a ten hour safety program required of all hunting license applicants. In California, classes are offered in Hmong, Spanish, Russian, German and Mandarin, but only 15 bilingual instructors teach the classes. Mr. Yang was the first Hmong instructor (there are now two more, both located in Fresno) in the state and already over thirty people have signed up for the next class.

While two other states—Minnesota and Wisconsin—have hired Hmong speakers for fish and wildlife issues, this certainly isn’t something I’ve seen much elsewhere. In the southeastern US, I’ve never heard of this being a problem, and while it seems like it ought to be limited to California, a state of such diversity, the Hmong presence in the Midwest is obviously strong as well. Maybe one day the stereotypes of the “good ol’ boy” out hunting will disappear and be replaced with the thought of people from all cultures—you never know.