Holidays Bring Out Spirits and Conspiracies

Posted by Jes Gearing in Etymology, Language and Culture on October 28, 2009 0 Comments 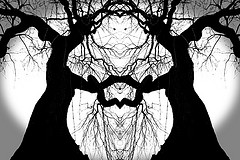 The last week of October and the beginning of November brings together some fairly disparate events, holidays, and emotions. For one, especially here in the U.S., October 31 is Halloween, that strange co-opted holiday where kids dress up in cute or ghoulish costumes and beg for candy from their neighbors. The following day, November 1, however, is All Saints Day—the day of remembrance and celebration of the saints, and the day after that, November 2, is All Souls Day—the day of remembrance for those who have died in the previous year or years before. Just a few days later, depending on the calendar, is Election Day in the U.S. which ushers in a new period of government policies and action. While this particular Election Day isn’t as exciting or grand as the Presidential one last year, for some states who will elect governors and House representatives, it’s all-important.

Given this strange mash-up of events, it seems that nothing would be able to bind them together. Two words, however, can—spirit and conspiracy. What might seem obvious to some, the etymological link between the two words, came as a surprise to me, a surprise that was a little bit delightful, I’ll admit.

Halloween, All Saints Day, and All Souls Day obviously deal with matters of the spirit. Originally the Celtic celebration Samhain, meaning “summer’s end,” Halloween comes from the Old English hálgen—hallow or “holy man.” When the Catholic Church switchd the holiday from a pagan one to a Christian one, it changed the name from Samhain to All Hallows’ Even—the evening before All Hallows, or All Saints Day. As for the sprit part of Halloween, Samhain was originally a celebration of the dead, the night of Samhain being the night when the barrier between the afterworld and the world was a bit thin and spirits could pass between the two.

All Saints Day, on the other hand, celebrates the lives of the Saints, a holiday originally held on May 13 after Pope Boniface IV consecrated the Pantheon at Rome to the Blessed Virgin Mary and all the martyrs in the early 600s. The original date of May 13 replaced a pagan holiday celebrating the antiquity, but was moved, only a century later, to November 1 by Pope Gregory III in order to coincide with Samhain, now called All Hallows Eve.

All Souls Day, one day later, remembers the souls, the spirits, of those departed. Also known as the Feast of All Souls or the Commemoration of all the Faithful Departed, All Souls Day is celebrated in Spanish speaking countries as Día de los Muertos or the Day of the Dead and in Lebanon, Syria, and Israel as Yom el Maouta, the Thursday of the Dead. This particular religious holiday was established some years after Halloween and All Saints Day in 998 by St. Odilo of Cluny, and was gradually picked up by dioceses around the world. Intercession and remembrance of the dead is certainly nothing limited to the western Christian tradition, but, once again, it coincides on the calendar with the Halloween-All Saints celebrations.

Now that I’ve covered the spirit-based holidays, what about Election Day? I’m not going to say much about it except that politics and conspiracy tend to go hand-in-hand. Just think of all of the theories surrounding John F. Kennedy’s assassination, or the various internet theories that popped up after the attack on the World Trade Center in New York on September 11, 2001. Or even more literally, the Burr conspiracy at the turn of the 19th century—a little known event that I find intriguing for how little it has to do with the American government—Aaron Burr only possibly wanted to help the Mexicans overthrow the Spanish government. Burr was eventually acquitted, but the tale reigned large for years after.

So what’s the big connection between spirit and conspiracy? The root word, of course! Spirit comes from the Latin spiritus which means “breathing, breath, air.” The chief Oxford English Dictionary definition of spirit is “The animating or vital principle in man (and animals); that which gives life to the physical organism, in contrast to its purely material elements; the breath of life.” With spiritus morphed in Italian to spirito, Portuguese to espirito, and Spanish to espiritu, the English spirit comes from the Old French esperit which was adopted into English via the Anglo-French spirit (espirit), spirite.

Conspiracy, as you might have figured out by now, also comes from the Latin spiritus, via the Latin conspirare which literally means “to breathe together,” and as the OED puts it so well, “whence, ‘to accord, harmonize, agree, combine or unite in a purpose, plot mischief together secretly.’” The definition, of course, is “To combine privily for an evil or unlawful purpose; to agree together to do something criminal, illegal, or reprehensible (esp. to commit treason or murder, excite sedition, etc.); to plot.”

The thing to think about then, in this upcoming week, is breathing. In order to not become one of those departed souls remembered on All Souls Day, we need to keep breathing; in order to avoid being put on trial for treason we need to not breathe together.

The Etymology of Halloween