Posted by Maria Khodorkovsky in Accent Reduction on February 16, 2017 0 Comments 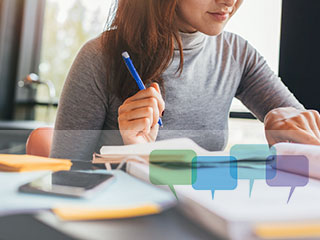 The United States has long attracted many of the world’s brightest minds – from scientists and engineers to linguists and educators.  While the country’s universities and businesses benefit from such a dazzling array of experts, foreign professionals and students often find themselves careening headlong into cultural and linguistic barriers that divide them from their American counterparts.  To ease their predicament – and that of the American students, coworkers, and friends with whom they interact – many institutes and organizations have begun to take a holistic approach to language training.  Universities like Northwestern, Yale, and Ohio University offer not only courses in accent reduction, but hands-on applied linguistics, speech analysis software, and immersion groups.  For many of the 300,000 foreign students doing graduate coursework at American universities, such programs are mandatory.

The bulk of graduate students who receive stipends from their universities depend on their campus jobs as teaching or research assistants within their departments.  These jobs require them to interact with professors, coordinate with administrators, and teach undergraduates.  While their English may be flawless on paper – the result of many years of rote memorization and grammar drills – the cadence, intonation, and pronunciation necessary for effective verbal communication sometimes pose a problem for foreign students and the undergraduates that they teach.  This is especially the case in the hard sciences and technologies, where foreign students make up almost half of graduate students, according to the Institute of International Education.  Even for many Indian or African students, who speak English as their first language, mastering the sing-song lilt of American English is no easy task.

To attempt to remedy incorrect pronunciation or a monotone intonation, foreign students enrolled in linguistics classes engage in a number of deconstructive exercises, breaking down sentences and even words into their smallest components.  Students examine models of mouths, mimic their teachers’ lip and jaw movements, and even hop up and down stairs while uttering certain words in order to encourage falling and rising pitch.  In such classes, students are encouraged to focus on the physical production of language in order to better understand and reproduce clearer speech.  These exercises are essential to integrating foreign students, allowing them to participate in American academia and business as freely and fully as possible.