How to Translate a Joke

Posted by April in Language and Culture, Translation on September 23, 2008 3 Comments 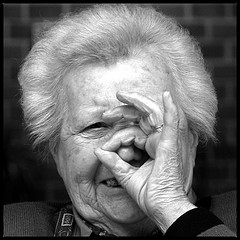 The best advice is simply: don’t!

I remember the first time I brought my French boyfriend, Laurent, home for the holidays. Although he made efforts, his English was limited. I was responsible for interpreting much of the small talk. It was no easy task — especially since he liked to tell a lot of jokes.

After being in France for a couple of years, I was at a point where I could actually “get” most French jokes. Also, I was already familiar with my boyfriend’s humor since he had explained his own jokes to me before. But something happened when I translated them for my American family. They made absolutely no sense at all. That’s how I learned that jokes are the hardest thing to translate!

I finally told Laurent to please stop telling jokes, but poor Laurent loved to make people laugh. It was an inherent part of his personality. Despite the fact that my parents already loved him and found him quite entertaining as he was, Laurent wanted desperately to share his unique wit. I wanted to help him.

Humor, however, is not universal. French-style humor, as I had learned, was very different from American-style humor. (Maybe that’s why I never really found my boyfriend’s jokes that funny in the first place.)

In England, for example, constant self-deprecation is the first step to humor. By contrast, the French sense of humor is fueled by ridicule and mockery that is directed toward others. Another frequent form of French humor is to exaggerate a statement to illustrate its falsehood. If you are gullible like me, you may not clue in to the “funny” factor.

We were in line for a baseball game. When I told my mom that Laurent said he needed to “pee the father-in-law to the mother-in-law” she widened her eyes and looked at me as if a spaceship had landed. Telling jokes in an international context is very tricky. It is not only a question of a good translation. A lot of humor depends on subtle cultural differences or on local references. In Laurent’s case, using the in-laws to point our how badly he needed to go to the bathroom was a bad choice in local reference. Although from what I understood, in Southern France it was a common and funny joke.

When you find yourself in situation where you are asked to translate an impossible joke, the best thing to do is simply acknowledge the person is telling a funny. You may be able to relay the basic gist; “he is telling a joke about how bad he needs to go to the bathroom.”

But unless you are prepared to give a whole lesson on the cultural underlying meaning (and lose the humor while you are at it) it’s best not to translate the joke at all.