Posted by Manny Echevarria in Translation on December 2, 2008 0 Comments 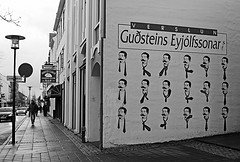 Perhaps no country has been hit harder by the current economic crisis than Iceland. An ALTA project manager who recently returned from Reykjavik, the northernmost national capital in the world, brought back news of protests, high unemployment, and a touching story about an Icelandic translator who goes by the name Newsfrettir.

In the introduction to her blog, Icelandic News in English, Newsfrettir explains that she was one of the thousands of Icelanders who have been left jobless since October’s wave of layoffs. As she says,

I lost my job at the end of October as a result of the depression so, for now, I consider my job to be translating Icelandic news for those of you who are interested in this crisis that is shaking the very foundations of the Icelandic society.

These translations are my only income, so i have a donations link at the bottom of every news article if someone wants to donate.

Newsfrettir signs off with the upbeat words, “Viking greetings with fighter spirit from Iceland!”, which, leaves the impression that despite how difficult the situation becomes, this translator will see it through. And, while Newsfrettir may not be a professionally trained translator, the effort serves as a reminder that translation continues to be a valuable asset during times of economic decline.