Skip to content
In Honor of Bastille Day: The Origin of the Baguette

Home » Beyond Words » In Honor of Bastille Day: The Origin of the Baguette 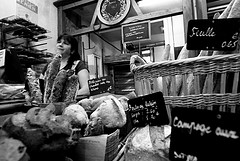 In honor of Bastille Day, I’ve decided to dally a bit in the history of one of my favorite French exports: French bread. Just a refresher, Bastille Day is a French national holiday celebrated every July 14 (quatorze juillet) to commemorate the Fête de la Fédération held on the first anniversary of the storming of the Bastille, a fortress-prison in Paris, on July 14, 1789. The fall of the Bastille was a turning point in the French Revolution and subsequently became an icon of the new French Republic. Today, like every other July 14th in France, a large military parade will march the streets of Paris and, traditionally, the President pardons offenders (typically petty offenders) and gives a “state of the nation” type address, but President Sarkozky has declined to do both since 2007.

For those in the know, the term “French bread” actually refers to la baguette. The baguette is a specific shape of bread — the diameter of the baguette can be 5-6 cm, but the length of the bread may be up to a meter in length. Parisian baguettes typically weigh 250 grams. The recipe and baking style (in a steam oven) was imported from Austria in the 19th century, but a French law which dictated that bakers could not begin work before 4 a.m. led to the creation of the distinctly elongated loaf. The longer, thinner loaf allowed bakers to complete their task before breakfast time. Thus the baguette was born.

A “baguette de tradition française” is composed of flour, water, yeast, and salt. No additives are permitted. While many recipes use baker’s yeast, artisan-style loaves are made with a poolish, a fermentation starter. The poolish (also known as a sponger, a starter, or the mother dough) contains water, flour, and yeast. The ingredients are mixed in a container and stored at room temperature for up to 72 hours before being added to the dough. This method was imported to France from Poland in the 1920s.

The word baguette literally means “little rod”, from the Latin baculum, a stick or staff.

Although la baguette is not entirely French in origin—it is today synonymous with France. Every English or American pop culture reference to France includes someone walking or riding their bicycle with a baguette peeping out of a bag or basket; the baguette is a symbol of modern France. I’m not going to quibble with the paternity of the bread.

Source:
Jim Chavellier, The Origin of the Baguette.