Posted by Jes Gearing in Language and Culture, Uncategorized on October 21, 2010 0 Comments 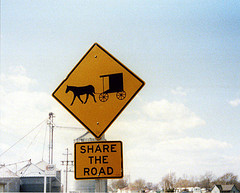 Recently, RIDE Solutions, a department of the Roanoke Regional Planning Commission, posted an interesting article summing up the issue of language in transportation planning. As a basis for discussion on the topic of transportation and language, Jeremy Holmes cites several articles (all of which have also been a part of the debate at Streetsblog.net).

Starting with Steve Magas’ criticism of “Share the Road” signage, Holmes writes: “The whole point of the ‘SHARED lane’ marking is to indicate to motorists that they ought to ‘share THEIR lane’ with cyclists… No law says that the motorist owns the road and the cyclist may borrow it sometimes, IF the motorist feels like sharing.”

At the heart of Magas’ argument is the idea that, over the years, the automobile has claimed the unwritten status of the default mode of transportation — cars are told to share the road with bicycles and not the other way around. Citing “the right to travel” which belongs to a person — not a vehicle — Magas also states that, legally, singling out one vehicle over another is redundant, since all persons in vehicles have the right to travel in the lane, all while making allowances for different kinds of vehicles (i.e. a tractor trailer, a sedan, a motorcycle, etc.).

Holmes also mentions an article by Michael Druker which challenges the idea of categorizing transportation (i.e. pedestrians, cyclists, transit users, motorists). Druker proposes a new, more multimodal way, of characterizing people and transportation — people on foot, people on bikes, people on transit, people in cars. This new categorization allows for the emphasis on the person in transit, not the vehicle.

The final article Holmes tackles is by Jarrett Walker for HumanTransit.org. In the article, Walker cites the 1996 directive by then-City Administrator of Palm Beach, Florida, Michael J. Wright:

Much of the current transportation language was developed in the 1950’sand 1960’s. This was the golden age of automobiles and accommodatingthem was a major priority insociety. Times have changed, especially in urbanareas where creating a balanced, equitable, and sustainable transportationsystem is the new priority. The transportation language has not evolved atthe same pace as the changing priorities; much of it still carries a pro-automobile bias. Continued use of biased language is not in keeping with thegoal of addressing transportation issues in an objective way in the City.

According to Wright, much of the language of transportation favors the automobile over any other vehicle on the road — something that needs to be changed. In the more than ten years since the document was written, planners have certainly been working towards addressing inequalities inherent in terms like ‘enhancements’ or ‘upgrades’ (i.e. an upgrade like widening a street might be positive for an automobile but negative for a bicycle), but these inequalities still exist.

Holmes’ assessment of the articles is intriguing. He criticizes the first two for being interesting intellectually, but as not being helpful in communicating with the community at-large. In regards to the first article, Jeremy writes:

Steve Magas’ argument against “Share the Road,” for example, is an interesting one with some validity, but the main problem I see with the argument is that the Share the Road sign isn’t making a political statement. The reality is that the road was probably engineered and built specifically to the size and speed of a motor vehicle, and therefore contains all kinds of assumptions about driver behavior and the physics of the objects traveling along the thoroughfare.

But he does contend that he would like to see Magas’ argument carried out in a court of law — which, in my reading of the three articles, could possibly render Magas’ argument the most important or valid. For every cyclist hit, there is a court of law that doesn’t know what to do with the law — there are no clear guidelines pertaining to bicycles or other alternative forms of transportation.

In discussing Druker’s idea of recategorizations, Holmes questions its validity because “here [he] think[s] the other is fighting against the common usage of language, and that is almost never a winning battle,” and he “fear[s] this runs the risk of some of the ridiculous ‘political correctness’ we have seen in the past.” Valid points, but I quibble with the idea that “language does what it wants to, and change is slow but inevitable. Artificial attempts to change its course almost always appear just that — artificial.” Yes, some attempts to alter the language of discourse is artificial or insincere, but, especially in regards to legal language or the language of official planning boards, reconstituting individuals within the scheme of transportation is probably a good thing. Are Druker’s suggestions the best? Probably not –they are a bit hokey, but they’re a start in the right direction.

Interestingly, the third article is the one Holmes finds most successful —

For one, its audience — planners and engineers, primarily, though civil staff in general — is a relatively small one, and one used to being continuously educated on new technologies and methods of planning, design, and communication. Changing the vocabulary of the trade, while not exactly easy, is something that can certainly be accomplished with time, particularly if the themes of this directive are applied to planning and engineering at the classroom level, and newly minted graduates come out using language that treated all modes with parity.

By dissecting emotion from technique, Holmes claims that Wright’s assessment about the stagnation of transportation language is accurate, and that the awareness of this in-trade stagnation is what will really lead to overall change.

While I agree with the idea that language change needs to more accurately describe specific transportation activity, I question the way that Holmes emphasizes a certain segment of the transportation sector — language change within the general civil engineering and urban planning community will eventually lead toward a greater recognition of different modes of travel, but at some levels the more esoteric and “popular” or “vernacular” language remains necessary to reach the greater public.

Education is needed at all levels — from the level of the school child, to the level of the person learning to drive, the level of the engineer designing a road, or the planner working on a study of a neighborhood. It’s especially needed at the legal level where laws rarely include or acknowledge bicycles or other forms of transportation. If transportation language is stagnant anywhere, it’s mostly stagnant in the court of law. Lawyers, like Magas, who are working towards changing this situation are an essential piece in the puzzle of language change and transportation in general.