Lions and Tigers and Grolars?

Posted by Chris in Language and Culture on March 17, 2009 0 Comments

Canadians have suspected for quite some time that the Grizzlies and the Polar Bears have been doin’ the dirty out on the tundra, but until now their claims have fallen on deaf and frostbitten ears.

Although this grizzly and polar bear hybrid has been in existence for some time in captivity, it has not, until recently, existed in the wild. We now present to you…. the Grolar Bear!!!

Environmentalists blame global warming and human encroachment on the bears’ respective habitats for this blessed union that has never happened previously because the two species had no reason to cross paths, let alone take the time to introduce themselves and get down to business.

The brutal truth of the matter is this: Grizzly Bears are moving further north in search of food and Polar Bears are running out of ice to prance around on and are forced to stay on land in search of food. Could this be a furry hookup brought on by climate change? Bears coming together in a vain attempt to hump their blues away?

Dr. George Divoky has spent the last three decades in the Arctic and he seems to think that this is a giant, seal-eating example of climate change. He recently told the Sun that from 1975 to 2002 he saw just three polar bears on Cooper Island (located off the northern coast of Alaska), where he has spent most of his life studying the life cycle of the Guillemot sea bird. Since 2002, Dr. Divoky claims that Polar Bears have become a regular occurrence, going on to say that he saw twenty in just three days.

Whatever the case may be, Polar bears and Grizzlies have been gettin’ it on. 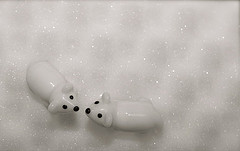 In 2006 a white bear with brown patches was shot in northern Canada and DNA tests confirmed that it was indeed the product of scandalous arctic rendezvous.

As your high school guidance counselor used to say, anything is possible and the Grolar Bear is no different. The habitat and breeding seasons of both bears do overlap a bit, but this is considered highly unusual in scientific community because of the timing of the mating season and behavioral differences.

But the proof is in the pudding. The Grolar, for better or worse, is here to stay.

Although everyone now agrees that these bears do exist in the wild, they have yet to agree on an official name. Other names for this mixed bag of bear goodness include the “polizzly, “pizzly” and the “nanulak,” which is a combination of two Inuit words, “nanuk” (polar bear) and aklak (grizzly bear).