Looking at Globish: A Note on the Impact of English

Posted by Jes Gearing in Language and Culture on April 1, 2010 0 Comments 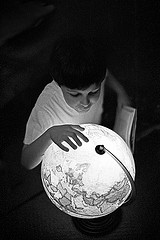 One decade in to the 21st century and we’re already starting to look for concrete trends that actually hold water. While fashion and the housing market and car design are mutable, where does language fit into the picture—and how will English impact global society? In a recent UK Guardian blog post, Robert McCrum, author of Globish: How the English Language Became the World’s Language, forthcoming from Penguin, argues that Globish, a form of simplified, non-grammatical English, will become the lingua franca of the 21st century.

Coined by Jean-Paul Nerriere, a French-speaking retired IBM executive, Globish refers to a non-standard English, a simplified form of English that could be spoken by anyone—Chinese, Indian, American, etc.—with a limited vocabulary of some 1,500 words. McCrum, in turn, argues that Globish, as an extremely viable and viral linguistic tool, is concerned with “the way in which Indians, Chinese and many Africans are now turning to English as a liberating and modernising phenomenon,” and how, as a linguistic force, it “begins to identify the viral nature of this lingua franca, the qualities of the English language and its culture that make it so contagious, adaptable, populist and even subversive.”

While I have nothing to argue with the idea of Globish as a linguistic force in the marketplace—as a way in which businesses can communicate with others in a universal tongue—I wonder how viable Globish is in a non-business setting. In terms of medical, scientific, literary, etc. communication, Globish seems limited. In breaking from the autonomous rule of standard languages, Globish does allow for broader communication. But within that broader communication, nuances are lost. McCrum elevates the idea of cross-cultural connections—“Globish analyses Twitter, Iran’s green revolution and Slumdog Millionaire, and places them all in a new context: a Globish-speaking society”—but one has to wonder what culture will be lost in the translation, or what role literacy plays in the transfer from standard language to the non-standard Globish.

Can Globish address both business and cultural concerns, or is it pigeonholed to economic forces? Be on the look-out for McCrum’s book in May—perhaps it will give us some answers, or at least a few more ideas on economic-cultural linguistics.