Posted by Maria Khodorkovsky in Etymology on September 21, 2009 1 Comment 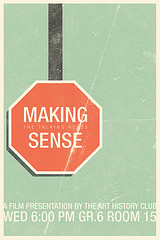 When we experience a sensation, we feel it; when something “makes sense” we get it; when we “get a sense” of something, we understand it; and when something is entirely senseless, it is stupid, out of touch with reality. The word “sense” has many practicable applications, and all seem to point to the idea that to sense is to get a whiff of the quintessence of a situation.

The experience of “sensing” can be as vague as a premonition or as concrete as touch – it can be physical, emotional, ideological, or spiritual – but it typically follows experience and precedes idea formation. How did our vast and varied understanding of the word “sense” come to be? The answer’s in the etymology.

The word sense stems from the Proto-Indo-European root sent-, meaning “to go, to strive, to have in mind, or to perceive.” It found its way into the Latin sensus as a word for feeling or perceiving, and later into European languages from the 15th-century Old French sens, of the same meaning. The early 17th century saw the development of the word “sensation” to mean endowed with sense or the senses.

How did we come to the understanding that the stimuli received from sensory perception are akin to rational judgments, as in “to come to one’s senses”?

In the mid-16th century, philosophers adopted the term to apply to the healthy exercise of one’s mental faculties, and thus to sanity. It was at that point in history when the word “sense” became linked to prudence more than perception and the term “senseless” was born. Although to be senseless literally means to be without the capacity to feel and perceive, the conversational understanding implies a lack of intelligence or purpose.

The meaning, however, remains intact: an act that is senseless proceeds from an actor who has not accurately felt or perceived a situation. Whether he is determined ill, stupid, or saintly by contemporaries depends solely on the outcome of his actions. Whether he “sensationalizes” a situation – a 19th-century term used originally in journalism – depends on whether or not he exploits human “sensation” – a 17th-century medical term chronicling bodily response to external stimulation.