Posted by Jes Gearing in Language and Culture on August 24, 2009 0 Comments 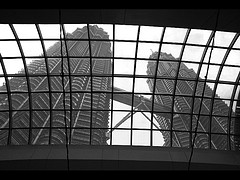 Malaysia, the South Asian country straddling the Malay Peninsula and the South China Sea is home to over twenty-seven million people. Malaysia was, until recently, one of the more stable economic powers in the region, even given its tumultuous history. However, the country is finding itself at a critical political moment right now as it tries to address conflict between diverse racial, religious, and ethnic groups.

According to Philip Bowring of the New York Times , Malaysian politics has been characterized by “52 years of sometimes authoritarian and corrupt rule by a coalition of race-based parties headed by the United Malays National Organization (UMNO), which controls most levers of power and money.” The political unrest is both politically historical and ethnic in nature—Malaysia wasn’t even an independent state until the mid-1960s and to this day four major ethnic groups vie for control of the country: the Malays, the bumiputra, the Malaysians of Chinese descent, and the Malaysians of Indian descent.

Now governed by elected monarch and Prime Minister, Malaysia actually didn’t exist as a unified state until 1963. In the late 18th century the United Kingdom established colonies on the Western half of Malaysia on the Malay Peninsula, but the colonies were not even governed by a unified administration. This British Malaysia was, until 1946, comprised of the Straits Settlements, the Federated Malay States, and the Unfederated Malay states. In 1946 the region was consolidated under one governing agency and renamed the Malayan Union. The Malay nationalists opposed this reorganization, and in 1948 the Malayan Union was replaced by the Federation of Malaya. The Federation reestablished the symbolic positions of the Malay rulers and defined the Malay states as protectorates (as opposed to colonies) of the United Kingdom. The Malay states in the Federation gained independence of the United Kingdom in 1957, and in 1963, Singapore, Sarawak, and British Northern Borneo joined the now-independent Federation to form Malaysia. On August 9, 1965, Singapore left the Federation, thus creating the Malaysia we know today. 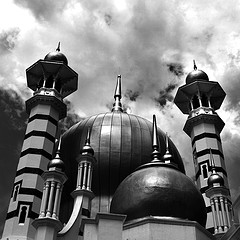 Malays are the majority at approximately 50% of the population. Malaysians of Chinese descent are the second largest ethnic group at 24% of the population, indigenous peoples with 11%, and Malaysians of Indian descent with 7%. Other various ethnic groups comprise the remaining 8%. By constitutional definition, Malays are Sunni Muslims who practice Malay customs and culture. This means that a Sunni Muslim of any race who practices Malay traditions is considered a Malay. The predominant language of the Malays is Malay, which stems from the Austronesian family. It is the official language of Malaysia and it is hypothesized that Malay originated on Sumatra Island sometime before the 7th century (the oldest written Malay document dates to the late 7th century). The use of Malay across the Asian peninsula is credited to the spread of Islam by the Muslim kingdoms. Malay can be divided into five periods: Old Malay, the Transitional Period, the Malacca Period, Late Modern Malay, and Jewish Malay. Old Malay was heavily influenced by Sanskrit and is virtually unintelligible to any contemporary speaker of Malay. In the 15th century the language experienced a period of rapid evolution as it became the language of choice in trade, and Arabic, Persian, Hindi, and Sanskrit vocabularies influenced the language. Written in the Latin alphabet called Rumi, a modified Arabic script called Jawi also exists. Rumi is the official written form in Malaysia, however.

The indigenous groups, known collectively as the bumiputra are the majority in several of the Malaysian states like Sarawak and Sabah. Bumiputra signifies ethnic Malays, Javanese, Bugis, Minang, and other groups such as tribal peoples. The term comes from the Sanskrit word bhumiputra which means “son of the earth.” These people groups are less common on the peninsula than on East Malaysia and are often underrepresented in the government and face various social-economic hardships due to their ethnic status.

The Malaysians of Chinese descent arrived between the 15th and mid-20th century, and this people group is referred to collectively as “Chinese.” The languages spoken by this people group includes Malaysian Mandarin, various Min dialects (including Penang Hokkien), Cantonese, Hakka, Malaysian English/Manglish, and Malay. The Malaysians of Indian descent are mostly descended from Indians who migrated to Malaysia during the British colonization. Tamils had populated the region before colonization due to the Tamil trade in maritime Asia. The languages spoken by this people group includes Tamil, Telugu, Malayalam, Punjabi, and Malay.

The major political conflicts are, unsurprisingly, between the Malay in the United Malays National Organization (UMNO) and the opposition comprised of all the other ethnic groups. The opposition has formed a coalition headed by the former Deputy Prime Minister Anwar Ibrahim, but it needs to address the concerns of “Malays in the Islamic Party (PAS), ethnically self-conscious Chinese and Indians in the left-leaning Democratic Action Party, and disgruntled moderate Malays and liberals of all races in Anwar’s Keadilan party.”

Interestingly, one of the major gains heralded by this opposition coalition is the recent ruling which ended the use of English in math and science classrooms. Now Malay is the official language in these academic settings. When racial-ethnic-religious-political issues arise, it seems that language is always a key element. Will language be another major issue in the upcoming pre-election months in Malaysia? I think it’s definitely something to keep an eye on.

Language in the Arab World

Wabi-Sabi: Translating the Beauty of Imperfection

Diglossia and the Arabic Language

Encounters at the End of Language