Posted by Maria Khodorkovsky in Etymology, Language and Culture, Uncategorized on April 16, 2015 1 Comment 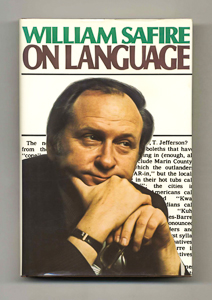 Recently a friend brought to my attention a delightful collection of William Safire’s articles from the New York Times Magazine. Many years ago, my friend wrote Safire regarding the origins of the word “trivia”, which the celebrated journalist had mistakenly attributed to the Latin tri via – the meeting point of three roads and, according to him, a spot where mundane events were bound to happen.

The correct etymology appears in the next paragraph, but the mention of this particular oversight is in no way intended to diminish Safire’s body of work. His contributions to the column “On Language” spanned more than 30 years and 1,300 installments of witty, erudite, and at times pugnacious, hair-splittingly good times in the world of English usage. Published in 1980, this eponymous compilation chronicles one year of Safire’s call-and-response with his audience, pairing each article with cheers, jeers, and unexpected insights.

Here you’ll find three amusing notes from Safire’s well-read readership. They are as relevant now as they were 35 years ago.

The correct etymology of “trivia” points to a later origin: the Middle Ages. At the time, university studies consisted of the seven liberal arts and were divided into the trivium and the quadrivium.

“Less important of the two was the trivium (rhetoric, grammar and logic); its study led to the degree of Bachelor of Arts. The higher degree Master of Arts was conferred upon those who mastered the four subjects of the quadrivium (astronomy, arithmetic, geometry and music).”

In response to an article describing how the author was chastised for calling someone a “girl photographer”, one reader offered this witty lament on the use of nouns as adjectives:

“As more and more women have stormed into the professional world, phrases like ‘woman doctor,’ ‘woman writer,’ and ‘woman lawyer’ have appeared with increasing frequency, and such misuse sets this feminist’s teeth on edge. A ‘woman doctor’ is a gynecologist… A ‘woman writer’ is one who writes women – either writes them letters or writes the word ‘woman.’ I’m not quite sure what a ‘woman lawyer’ is…”

Finally, not one to shy away from a scathing but eloquent admonishment, Safire follows his article on the origins of “copacetic” with this reader response:

“Amateur etymologists are people whose imaginations tend to wag the dog. They are fictioneers manqués. It goes against their grain to admit that an etymology could be not merely uncertain but totally unknown…. Far better to invent a whole-cloth story, or to defend a bad but titillating guess, than dully to admit ignorance.”