To Thank or Not to Thank? Expressions of Gratitude Around the World

Posted by Janet Barrow in Language and Culture on November 25, 2019 0 Comments 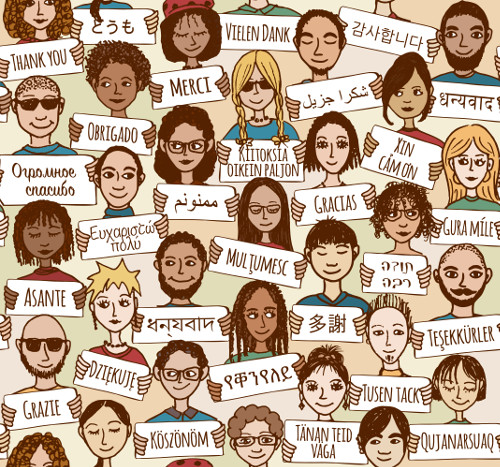 It’s a lesson we’re taught at a young age: What do we say? Say thank you…or gracias…or danke schön. Among world languages, English places perhaps the highest value on the linguistic expressions of thanks. So it’s logical that English speakers tend to conflate the expression of gratitude with the feeling of gratitude. If somebody didn’t say ‘thanks,’ we often think, they must not have been very grateful. And yet, in English, ‘thank you’ gets used so frequently that it can easily start to feel transactional. You say it to your friends at the end of a night out, or to your waiter as you walk out of a restaurant. Sometimes, at the end of an email, you even thank whoever you’re writing for taking the time to read what you’ve written.

As Indian writer Deepak Singh wrote of his experience of moving to the United States, “Initially I was surprised when people thanked me for visiting their house when they were the ones who’d invited me, but then I learned that Thank you for coming to my home actually meant It’s time for you to get out of my house.” Thus, for English speakers, saying thanks is often little more than a coded closing statement, much like the period at the end of a sentence. Once we recognize this, it’s easy to understand Singh’s utter bewilderment at the police officer who wrote him a speeding ticket and then said, “Thanks, have a nice day.”

Social Cooperation as Expression of Gratitude

It’s true that English speakers might value the expression of thanks, especially in formal and business settings. But do we say it as much as we think in our casual interactions with family and friends? A new research paper titled, “Universals and Cultural Diversity in the Expression of Gratitude,” suggests that no, we do not.

The research team behind the paper looked for expressions of gratitude in daily informal interactions across eight languages: English, Italian, Polish, Russian, Lao, Cha’palaa (spoken in Ecuador), Murrinhpatha (spoken in Australia), and Siwu (spoken in Ghana). ‘Expressions of gratitude’ liberally included almost any recognition that a request had been complied with, and thus counted phrases such as ‘sweet,’ or ‘good job,’ in English, and parallel phrases in the other languages studied.

Nick Enfield, a linguist at the University of Sydney, argues that this was the case because, “Our basic stance is one of reciprocity. When we ask people to help us, the default is that they will.”

As it turns out, the universal way in which gratitude is expressed is not through giving thanks, but rather through participation in a social pact in which mutual assistance and collaboration is the norm. In fact, the practice of giving thanks seems to have little to no impact on the practice of social reciprocity. Languages where thanks are rarely or never given, such as Cha’palaa and Siwu, are just as reciprocal as language where thanks are given relatively frequently. In other words, if I ask you to pass the salt, you’re likely to do it whether or not you expect to be thanked. That is, of course, as long as I hold up my end and serve you a scoop of ice cream when you ask.

When ‘Please’ and ‘Thank You’ Offend

It is in informal settings in particular where the practice of giving thanks becomes most culturally varied. In China, for example, the use of ‘please’ and ‘thank you’ can actually have the opposite effect of politeness. “The Chinese way of being polite to each other with words,” writes Deborah Fallows, author of Dreaming in Chinese, “is to shorten the social distance between you. And saying please serves to insert a kind of buffer or space that says, in effect, that we need some formality between us here.”

In India, the dichotomy between giving thanks to strangers verses relations seems to be even starker. Deepak Singh writes, “In India, people—especially when they are your elders, relatives, or close friends—tend to feel that by thanking them, you’re violating your intimacy with them and creating formality and distance that shouldn’t exist. They may think that you’re closing off the possibility of relying on each other in the future. Saying dhanyavaad to strangers helps initiate a cycle of exchange and familiarity. But with family and friends, dhanyavaad can instead chill relations because you are already intimate and in a cycle of exchange.”

Dr. Enfield’s postulates that most of the 6,000 to 7,000 world languages don’t have a word for ‘thank you.’ When we consider the negative implications of thanking intimates alongside the fact that many languages are spoken in very small communities where speakers are likely to know each other, that claim starts to feel quite plausible. So while Game of Thrones fans may have thought that the Dothraki language’s lack of a word for ‘thank you’ was a reflection of their hedonistic cultural practices, in the real world, such a lack is often an indicator of just the opposite – respect and intimacy.

Still, as a native English speaker, I can only leave off in the way that I know best: thank you, genuinely, for reading. I hope you’ve enjoyed this post.