Posted by Maria Diment in Language and Culture on October 19, 2018 0 Comments 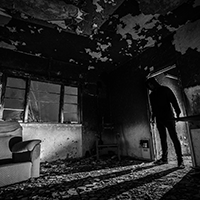 Whether October has you curling up with Hocus Pocus and the Addams Family, or a level up in terror is more to your taste, it’s likely that you’ve watched your favorite scary movies over and over again. As a visually-focused genre reliant on universal tropes with often minimal dialogue, horror movies are the perfect medium for foreign language learners to practice their skills. Even if you’re not currently learning Swedish or Persian, however, consider expanding your horror repertoire with the movies on this list – if you’re a scaredy cat like me, there’s always the handy distraction of subtitles to take some of the edge off what’s unfolding on screen. A Technicolor fairytale set, a prog-rock soundtrack provided by a band called Goblin, and a ballet academy in the woods of Germany that hides a troubling secret: the perfect setup for wide-eyed Jessica Harper (as an American transfer student) to get caught up in a lot of (beautifully staged) trouble. Master of the Italian giallo genre (horror with mystery/detective elements), director Dario Argento said of the upcoming US remake of Suspiria that either it would have to copy every shot exactly from the original, or it could never live up to the name. Definitely feast your eyes on the splendor of the original before you test that boast in theaters this November. A good creature feature is crucial to any Halloween lineup. The Host is about an amphibious monster (created when a US scientist without a conscience dumps 200 bottles of formaldehyde into the Han river) who kidnaps a bumbling layabout’s daughter, and the ragtag gang who tries to get her back. This movie is as much horror flick as dysfunctional family comedy and political satire. Anyone with a tendency to like smart-alecky plot twists and geek out over B-film monsters will enjoy this one. J-horror is a formidable and extensive genre, but one film stands above the rest. It starts with the pretense of a rom-com: the son of a recently-widowed man suggests he find a new wife, and the man holds auditions for a fake movie role to find the perfect candidate. The chosen dream girl waits four days in a room empty of everything but a phone and a large sack for the man’s call, then answers in an uncannily breezy manner. Director Takashi Miike expertly paces the plot, delivering his message in an audience-punishing ending. This movie has been called “the first Iranian vampire Western,” and I am here for that. It is Ana Lily Amirpour’s directorial debut, a film noir shot in black and white, drawing on inspiration from spaghetti westerns, rom-coms, the Iranian new wave, and even elements of the grunge scene. Filmed in California with a cast of Iranian expats, the movie is set in a fictional Iranian town called “Bad City.” A beautiful girl wearing a chador spends her time listening to music alone in her apartment, skateboarding, and melting into the shadows before revealing herself across empty parks and parking lots to her victims. Very atmospheric and very satisfying. The absolute darkness of a power outage, a locked down building, and fast, ravenous zombies. One of the earliest and best films in the found footage subgenre, this is co-directed by two Spanish horror specialists, Jaume Balagueró and Paco Plaza. As part of their reality series, TV reporter Angela and her cameraman Pablo follow a local fire crew for an evening. The station receives a distress call from an apartment building in Barcelona, where they are soon confined with what remains of the terrified residents. This is a white-knuckler, tense the entire way through with absolutely no relief from a change in perspective – we view everything through Pablo’s disorienting, erratic camera. Before this subgenre was destroyed by movies that didn’t work well within its limitations, REC created a perfectly horrifying, convincing experience. Capgras delusion is a psychiatric disorder in which a person believes that a family member, friend, spouse, or even pet has been replaced by an identical (usually sinister) impostor. A woman arrives home after undergoing plastic surgery, her face covered in bandages with just her eyes and mouth showing. Her twin sons are suspicious of her strange behavior and unnerved by her appearance, beginning to doubt that she is their mother. High tension and brilliant misdirection lead to a twist ending that I for one did not see coming. “We didn’t want to make the scariest film. The film is uncomfortable to watch. You want to watch it, but at the same time, you can’t look any more. That’s what we like,” said one of the directors, Veronika Franz. If, like me, you can only handle so much gore, ghosts, and shaky found footage, I highly recommend this one as a subtle, atmospheric horror palate cleanser. Oskar and Eli are two loners: a bullied, placid 12-year-old with troubling revenge fantasies, and a pale little girl who has been 12 “for a very long time.” Sinister and character-driven, this movie manages to stand out in a saturated genre, making humorous nods to common vampire tropes without descending into parody, with a satisfying conclusion and great performances from the leads (whom it took a full year to cast). Most importantly, I didn’t have to quiver behind my hands even once.