Short, Shorter, Shortest: A Note on the Origin of Shorthand

Posted by Jes Gearing in Language and Culture on August 10, 2009 1 Comment 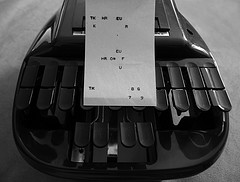 I’m fascinated by invented languages. When I was younger I remember my mother telling me the story of our family friends who met in college and fell head over heels in love. Their method of communication: Elvish, as in J.R.R. Tolkein’s invented elven tongue. The story goes that they would write love notes to each other on the blackboards posted outside of their dorm room doors, and since no one else could read the messages I’m sure they were fairly daring. Since hearing about those two I’ve wanted to learn an invented language, but I’ve yet to find the time or the willpower to learn something no one else I know speaks or writes. Latin, at least, would be useful— Elvish, not so much.

Something that might be useful, or at least more common, however, is shorthand. Jennifer Schuessler pointed me over to Leah Price’s history of shorthand published in the London Review of Books and, needless to say, it’s pretty interesting.

It turns out that shorthand’s genesis wasn’t in the courtroom or office, but in the layman. Until the 1870s it was used by pretty much anyone for writing down one’s thoughts or copying interesting bits of information. The shorter form of note taking, clergymen used shorthand to “rip off each other’s sermons” and Dickens was able to gain entrance into Parliament by memorizing the technique. Not simply useful for upward mobility, it was also “spread through a counter-culture of early adopters – spirit-rappers, teetotallers, vegetarians, pacifists, anti-vivisectionists, anti-tobacconists.” Movements of freedom—religious, political, social—all share a common ground: shorthand.

On the literary front, shorthand magazines published reprints of Robinson Crusoe, Around the World in Eighty Days, and the Sherlock Holmes stories. A young woman named Martha Watts sent love letters to Isaac Pitman, author of Stenographic Soundhand and inventor of the most common form of shorthand, Pitman’s Shorthand. Pitman’s wife, unable to read the language, needed a translator to read the scandalous material. Shorthand enthusiasts, an almost completely male population, connected with each other through these magazines and through writing letters to each other in shorthand. It was the counterculture obsession of the 19th century.

After the Civil War and the First World War, the practice of shorthand was taken up by woman as they filled secretarial roles in offices, and, as Price put’s it so eloquently, “As stenography fell into the hands of girls and hypochondriacs, its ethos changed from identitarian to utilitarian, from voluntaristic to vocational.” Today, the language is essentially dead and used only in the most basic form in journalism courses.

After a quick internet search, however, I found an astounding number of forms of shorthand. Pitman certainly doesn’t dominate the shorthand market. While Price mentions the form that replaced Pitman, Gregg, she claims that “Gregg was to Pitman as Windows is to Linux, or Pilates to yoga: a technique stripped of the ideological baggage that had originally impelled its spread.”

The version dominated the American market, but fell short of a strong following in Britain. The first modern version of shorthand goes back to the 16th century. Timothy Bright’s system created in 1588 featured 500 arbitrary signs and markings that resembled the words they were communicating. Shortly thereafter a number of other versions were created including John Willis’ stenography and Thomas Shelton’s tachygraphy.

Shelton’s form is the most well-known besides Pitman’s: Samuel Pepys and Isaac Newton are two famous adherents. Twenty editions of his book, Tachygraphy, were published between 1626 and 1710. Essentially, each consonant was represented by a simple symbol and the vowels were represented by the relative positions of the consonant. For example “B with symbol for T drawn directly above it represented ‘bat’, while B with T below it meant ‘but’; top-right represented ‘e’, middle-right ‘I’, and lower-right ‘o’.” -via Wiki. As an aside, apparently Thomas Shelton’s translation of Don Quixote is the first translation of the novel into any language—this guy got around.) Various other versions in both English and other languages evolved over the following two centuries, culminating in Pitman’s shorthand.

So why did Pitman’s system dominate the language? Basically it was just easy to use. Like the systems preceding it, Pitman’s is a phonic system where the symbols represent sounds, not letters, but unlike other systems, Pitman introduced line thickness as an indicator of voicing (a way of describing if a sound is heard in a word). A total of twenty four consonants, twelve vowels, and four diphthongs are represented in the language, with the consonants drawn by strokes and vowels by dots. Vowels, of course, can be eliminated if the context is strong enough to do so. Later versions of the language—Pitman’s New Era and Pitman’s 2000—were developed, but the standard is still the original Pitman’s Shorthand.

Will I be learning shorthand anytime soon? I think I can say probably not; I’ve got a few other more important things on my plate. But is the subversive history of the language incredibly interesting? Yes, of course it is. Any language that supported the theft of sermons from one clergy to another as well as the spread of vegetarianism and pacifism gets two thumbs up from me. As for Price’s history of shorthand, I can’t wait for the book to come out. It’s bound to be a great read as well as, maybe, and impetuous to get out of my comfort zone of computers and modern technology and get back to the lined paper shorthand phenomenon.