Posted by Chris in Language and Culture on April 1, 2009 0 Comments 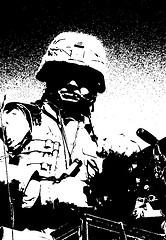 You remember FUBAR, right? Who better to create new words than soldiers with their constant supply of military jargon, initialisms, and acronyms. Through films, memoirs, and stories, soldier slang often makes it into the mainstream.

Without further ado, here are the top ten new slang terms coined by U.S. soldiers in Iraq and Afghanistan:

Single-digit midget:
Actually has nothing to do with the physical stature of a soldier. It’s simply a term used for a member of the Armed Services with less than ten days left of duty. Although it would be way cooler to have a platoon of little people marching around in the desert for two reasons: a smaller target and the element of surprise.

Geardo:
Soldier who absolutely has to have the latest and greatest killin’ technology but has no idea how to use it. You remember the first dude in the office with a blue tooth Blackberry and how much fun it was to call him just to watch him scramble and curse as he tried in vain to answer the damned phone. It’s like that, but with guns.

Groundhog Day:
Another day of duty in Iraq. Do you think Bill Murray would consider a sequel to the original cult classic based on this concept?

Fobbit:
An American soldier who never leaves a Forward Operating Base (FOB). This is definitely not a term of endearment. Yes, these guys and gals have indeed been to Iraq, but the ones on the frontlines definitely experience a different Iraq during their stay.

DBIED:
Acronym for Donkey-Borne Improvised Explosive Device. Also known as the Shock and Hee-Haw, which I find to be much more entertaining.

Hillbilly Armor:
Vehicle armor made from whatever materials the insurgents can scrounge up. Since the closest Home Depot is probably a bit of a reach, scrap metal and bits of wrecked vehicles are used. Also known as “Frankenstein” in the Marine Corps.

Shut up and Color:
Although it sounds like the words of a cranky Kindergarten teacher, this phrase is actually used for a soldier who is expected to do his duty despite the less than ideal circumstances he may face.

KMAG YO-YO:
Another Acronym. Kiss My Ass Guys, You’re On Your Own. Translation: It’s been cool and all, but it’s time for this soldier to hit the dusty trail.

Embrace the Suck:
Yeah, we know it blows, but we’re just gonna have to deal with it soldier.

Rummy’s Dummies:
This is a derogatory name for the US military under the leadership of former Secretary of Defense Donald Rumsfeld. I hope the guy is enjoying his retirement.