Sowing the Seeds of… a Family Production Responsibility System? 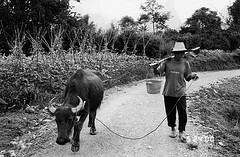 What do you think of when you hear the words “Family Production Responsibility System”?

What? It doesn’t bring to mind carefully tended rows of corn, beans, and tomatoes? Acres of wheat, rice, and soybeans? Chickens running around a dusty side yard? I don’t think so either, but apparently the Chinese government came up with the world’s most unappealing term for the idyllic pastoral farm back in the 1970s, something that Lester Brown pointed out to me in his post Rethinking Food Production over on Grist’s blog.

Brown’s post is just a synopsis of his chapter “Feeding the Eight Billion Well” (from Plan B 3.0: Mobilizing to Save Civilization ) in which he briefly charts the global food economy and highlight’s the landmark announcement in 2005 form the World Food Programme and the Chinese government that China would no longer receive food shipments. Not only has China ended its dependence on food aid, but almost overnight it has become the world’s third largest food aid donor.

Brown cites the key to China’s economic and agricultural success to the Family Production Responsibility System initiated in 1978 as part of the Four Modernizations Campaign. The Family Production Responsibility System is a ridiculously long-winded term for a family farm. The Chinese government dismantled its food collectives and gave agricultural responsibility back to individual families. These family farms then doubled food production (specifically grain) from 1977 to 1986. “With its fast-expanding economy raising incomes, with population growth slowing, and with the grain harvest climbing, China eradicated most of its hunger in less than a decade — in fact, it eradicated more hunger in a shorter period of time than any country in history.”

The proposals Brown offers in the rest of the article for conquering world hunger are dubious at best. Multicropping (planting wheat early in the season, harvesting it, and then planting and harvesting rice in the same year) is a great idea on paper, but it requires more than just good soil moisture (as Brown suggests). The nutrient loss (think nitrogen, phosphorous, etc.) from that much tilling, planting, and crop growth would obliterate the agricultural ecosystem in a few years. It just isn’t sustainable. Other ideas like the simultaneous planting of grain and leguminous trees in Africa (the sapling’s leaves drop organic material into the soil, organically fertilizing it) are more sustainable, but really, why didn’t Brown provide a more in-depth look at China’s family farms?

Maybe I’ve been reading too much Michael Pollan lately, but it would have been nice to see Brown explore the exact dynamic of China’s Family Production Responsibility Systems (how big were they? How much did they rely on Western industrial technology? What crops did they grow besides grain — humans can’t live on grain commodity alone!). Of course, maybe it’s the name that throws him off: Family Production Responsibility System. It’s clunky, Orwellian, and simply strange. A little re-branding might fix it — that, and some major agricultural policy shifts.