Posted by Manny Echevarria in Language Training on March 26, 2010 0 Comments 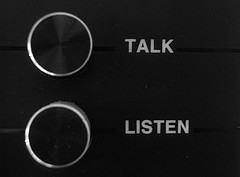 Language learners experience a blow to their confidence when they fail to comprehend a native speaker. Many students have experienced something like this: after months or even years of diligent study and practice, they fail to understand someone during a casual conversation, and are too embarrassed or frustrated to ask that person to repeat what was said. Sound familiar? Many language learners try to hide the breakdown in communication. The problem, however, is not something to be embarrassed about — it is often the result of never having practiced speech perception.

Speech perception is the process by which we hear, interpret, and understand the sounds that make up language. While most people think first of the tongue when acquiring new language skills, the ear should not be forgotten. The auditory perception and comprehension of sounds specific to the foreign language you study are vital to communication, and these skills need to be practiced. For instance, many English language learners have trouble distinguishing between l and r sounds in spoken English. This difficulty doesn’t suggest that they are slow learners or lacking in language abilities, but that they have not spent sufficient time practicing listening comprehension with the speech sounds of English.

Research by CDT scientists specializing in hearing and cognition shows that speech perception practice makes learning English easier when paired with existing language training methods. Emeritus Professors James Miller, formerly of Washington University School of Medicine and Charles Watson, former chair of the Department of Speech and Hearing Sciences at Indiana University, have drawn from their many years researching speech perception and computer-based training systems, to develop the most comprehensive speech perception training program: Speech Perception Assessment and Training System for students of English as a Second Language (SPATS-ESL).

The SPATS software system, originally developed for the hearing-impaired, was modified for use with ESL. The program works by helping learners to recognize syllable constituents: onsets, nuclei, and codas, as well as sentence recognition. Syllable constituent and sentence tasks are interweaved throughout training. In constituent training, SPATS uses an innovative training algorithm, Adaptive Item Selection (AIS), which focuses training on specific sounds.

ALTA Language Services, a leader in customized language training for 30 years, has entered into a cooperative arrangement with Communication Disorders Technology, Inc., developers of computer-based speech training systems for persons with hearing impairment and for students of English as a second language. To learn more about the program, please visit our Speech Perception Training page.