Posted by Jennifer Young in Language and Culture, Uncategorized on May 24, 2012 0 Comments 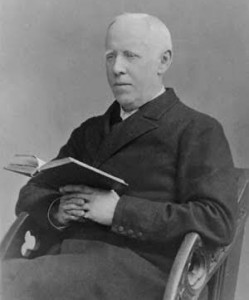 Spoonerism (n.): the transposition of initial or other sounds of words, usually by accident.

As a professor and dean at New College of Oxford University in the late 19th century, William Archibald Spooner was well-respected, but he was also well-mocked. One of the more famous “absent-minded professors” in recent history, Spooner compiled a laundry list of embarrassing language mishaps he could never live down. The one that stuck with him even after his death was his tendency to swap the consonants, vowels, or other parts of two different words with one another. “Three cheers for our queer old dean!” he once exclaimed at a university gathering. What…? Oh… Our dear old queen. Queen Victoria. Being in a room with Spooner required a little guesswork and interpretation, at least according to Oxford folklore.

Although he often denied them, Spooner sometimes confirmed the anecdotes and news stories relating his speech blunders. People certainly made such errors long before his time – but not with such frequency. Whether he actually constructed hundreds or only a handful of mismatched morphemes, the transposition of adjoining words – in phrases like, “a blushing crow” (a crushing blow) – will forever be known as a spoonerism.

A spoonerism is a slip of the tongue– a momentary confusion in the part of the brain that formulates speech. Spooner had a nervous tick that may have helped produce his permutations of speech. For most people, though, it’s careless spacing out during a conversation – a fain brart. Radio and TV host Harry von Zell once introduced our 31st president as “Hoobert Heever.” But a Spoonerism isn’t always accidental. The laughter elicited by odd word pairings that would otherwise be everyday language inspires some actors and authors to ante up their wit. Dorothy Parker pronounced her preference for self-medicating by saying, “I’d rather have a bottle in front of me than a frontal lobotomy.” Shel Silverstein’s book title “Runny Babbitt: A Billy Sook” wasn’t a printing error.

English lends itself well to Spoonerisms because of its diverse set of sounds and fluid phonetics. Theoretically, though, it should work in any other language, although with differing results. The human brain is hardwired for language the same way across cultures, so it’s just as susceptible to spoonerisms in English as in Japanese. Whether the resulting malapropism is intelligible or gibberish would depend on how much of the vocabulary of the language can be altered in that way and still be a real word. In Poland, a Spoonerism is known as a marrowsky, named for a count who, like Spooner, would also be remembered more for his speaking habits than his professional accolades. A common Spanish malapropism is “Se me lenguó la traba,” which translates approximately to “my stuck got tongued,” when what was meant is, “Se me trabó la lengua” (my tongue got stuck). Although “lenguar” is not an actual Spanish verb, it can still be understood.

Cognitive psychologists have deduced that spoonerisms follow a logical pattern rather than being completely random. Rarely, if ever, will the vowels of the front end of one word be swapped with the last part of another. Before speaking, the mind already has a grammatical framework of what the phrase needs to look like. When it comes out as a spoonerism, the usual flawless phrase has been intercepted by some internal or external distraction. The brain maintained the structure, which is innate, but was unable to provide the exact sounds that were requested.

The occasional spoonerism is a sign that our brain is accurately processing the structure of a language – it’s just distracted and unable to coordinate, like a rubbernecker in traffic. Spoonerisms have helped scientists understand how the brain formulates language. Rather than choosing one word at a time, it is now believed that the brain forms clumps of related words before you spit them out. It’s these associated words that then become a spoonerism, like “barn door” becoming “darn boor.” Spoonerisms can and will happen without a perfect attention span. Thankfully, they’re funny, make good inside jokes, and can also lead to creative output. Without spoonerisms, the Napa Valley city of Calistoga, California, would have a different name: It was called “the Calistoga of Sarafornia” (Saratoga of California) in a discussion comparing the area’s hot springs to those in Saratoga, New York. Sakes mense, doesn’t it?