Posted by Jes Gearing in Language and Culture on October 7, 2009 0 Comments 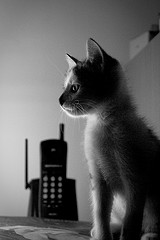 The field of animal cognition has been rapidly expanding since the mid-twentieth century. In the March 2008 issue of National Geographic, Virginia Morell explored the various animal cognition studies currently being run in labs and research centers around the world in her article Minds of their Own. One study of orangutans shows that orangutans can communicate with abstract keyboard symbols; another example, this one in pop culture, pertains to a dog named Rico who, when he appeared on a German TV show in 2001, showed that he knew the name of 200 toys. A scientific report on the dog after the show showed that “he could learn and remember words as quickly as a toddler.” It has been suggested that Rico, and all dogs’ ability to learn and recognize human words is linked to the canine evolution alongside humans.

“Without Darwin’s evolutionary perspective, the greater cognitive skills of people did not make sense biologically. Slowly the pendulum has swung away from the animal-as-machine model and back toward Darwin. A whole range of animal studies now suggest that the roots of cognition are deep, widespread, and highly malleable.”

But what about animal language itself? All of the studies highlighted by the National Geographic article focused on animals’ ability to learn and comprehend human language. Many people agree that animals themselves have a type of language specific to their various species’ chirps, squawks, barks, howls, and yips. Even Doctor Doolittle suggested that we should “walk like an animal, talk like an animal.” So what do animals talk about?

One obvious topic is predators. Olivia Judson explored some of the various field studies on animal language in her blog post Leopard Behind You! . One study shows that vervet monkeys, an old world species found in Southern and East Africa, don’t just alert for predators but cry differently for different predators. “Leopard!” is not the same as “snake!” or “eagle!.” If you hide a loudspeaker in the bushes, and startle unsuspecting monkeys by playing recordings of “snake!” at them, they will look around at the ground. “Eagle!” makes them look up. “Leopard!” sends them scampering to the trees. In the new world, Gunnison’s prairie dogs have different sounds for coyotes, humans, dogs, and hawks.

The nature of the learning curve and process for each new member of the species is different species-to-species, so researchers are unsure of how the subtleties of predatory alarm are acquired. The hypotheses right now are either by evolution, by personal experience, or a combination of the two. Of course, when linguists comment on whether animals use language, we get a heavy dose of skepticism. Geoffrey Pullum of Language Log fame is usually quick to slap down animal speech claims, not because animals don’t communicate, but because not all communication can or should be called “language.” His many posts on the subject can be found here.

Either way, animal speech is something of great interest to many philosophers, scientists, and theorists. Think of it the next time you’re walking through a forest and the birds start squawking up a chorus — they might be shouting “human, human, human.”