Could Texting Be Making Us Linguistically Smarter?

Posted by Janet Barrow in Language and Culture on April 17, 2019 0 Comments 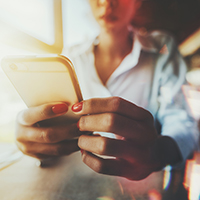 Communication via complex language is perhaps the single most defining characteristic of humankind. But if the birth of spoken language was charted as hour zero on a twenty-four-hour clock, and the moment that you’re reading this article represents twenty-four-hundred-hours, written language would have only appeared about fifty-three minutes ago, at 11:07 p.m. We’ve been speaking for a little over twenty-three times as long as we’ve been writing, and in fact, of the more than seven thousand languages spoken on Earth today, it is estimated that only about half have a written form at all.

The most common form of spoken language – conversation – tends to be loose and short-winded, with the average speaker saying just seven to ten words at each turn. It’s full of repetitions, false-starts, incomplete sentences, corrections, and interruptions. Written language is often the opposite. It tends to be long-form and more intricate, using longer sentences and many more subordinate clauses. It uses punctuation and formatting, and works to provide meaning clearly and directly, in contrast to spoken language, which relies heavily on the ability to deduce meaning from context.

When writing was invented, it was used mostly as a tool for recording history and composing epic poetry. But eventually, written language began to take on a new interest. It became a way of preparing and formalizing speech. Suddenly, when we knew we wanted to say something and say it well, we decided that the best way to go about it would be to first write it down, then maybe edit or re-write it, and finally, after all of that, actually say it. It’s thanks to this idea that we have great speeches, like the one made at FDR’s 1933 inauguration, at which he coined the famous phrase, ‘the only thing we have to fear is fear itself.’ It would have been pretty hard to think that up on the spot, so thank you writing – you’ve opened up a whole world of expression that wouldn’t be possible without you!
If formal speech is a way of talking like you write, the reverse of that would be a way of writing like you talk – which we do with texting. It’s long been abhorred as the destructive little-brother of literacy and poeticism, the mortal enemy of the type of beauty FDR created from something as common and mundane as words. But if we can accept the premise that conversational speech can exist side by side with formal speech, song or any other verbal form of expression without one trying to co-opt the other, doesn’t it follow that the written medium might have room for more than just formality?

A study in the British Journal of Psychological Development looked at how ten to twelve-year-old students’ knowledge of text abbreviations (textisms) related to their school literacy attainment. When they looked at the ratio of textisms to total words used in messaging, they found that more textisms were positively correlated with word reading, vocabulary, and phonological awareness. Why? The simple explanation is that students who were more knowledgeable of textisms tended to have more exposure to print. Spending lots of time on their phones and computers meant that, cumulatively, they were actually reading more than their less internet-addicted peers.

Texting has also been linked to an increase in emotional expression. Its informality allows texters who may otherwise be fearful of confrontation to say what they mean and to draft and think about their responses in tense or uncomfortable situations. In fact, one study showed that teens who are accustomed to correcting messages before sending them out become better self-editors. This may be true in part because the way that texts are drafted tends to fall into two categories: low self-monitoring and high self-monitoring.

Some texting exchanges, like the type made on a daily basis between friends or siblings, imply a low level of self-monitoring. They are deeply conversational, meaning that texters are not careful about spelling or punctuation or how pretty their writing sounds. The idea is just to get the message across.
In another type of texting exchange, however, users become high self-monitoring. This is what may happen when texting occurs between new romantic interests or in a confrontational situation. Use of punctuation is highly analyzed, though in ways that may differ from traditional punctuation. A period may suggest harshness, an exclamation point may mean sincerity or eagerness, and the dreaded ‘k,’ indifference.

This is where texting language really gets interesting. Unlike formal written language, but very much like spoken informal language, texting language is fast-evolving. A good example would be texting’s most infamous language shortcut – LOL. Once a genuine expression that a texter had found something funny and was ‘laughing out loud,’ LOL quickly morphed into what linguists call a pragmatic particle, or a ‘marker of empathy,’ similar to nodding or saying ‘right, I see,’ during conversation. Essentially, it now serves as a way of softening an exchange and making oneself sound friendly.

The interesting thing here is that the rules in texting language often differ from those in formal written language. So while a period is totally acceptable and even entirely necessary in formal written language, in texting language, it is not necessary, and its use may even indicate anger or coldness.
These differences in meaning, as well as the huge index of terminology unique to texting language (which makes texters capable of understanding sentences like ‘btw thnx 4 ur help td, ily’) have caused many linguists to begin considering texting language as its own dialect. And bidialectisim − the ability to speak or write in more than one dialect − has been linked to the some of the same benefits as bilingualism, including improved executive brain functions, such as short-term memory, and resistance to Alzheimer’s.

Sure, it’s annoying when your friend or your kid won’t put down their phone at the dinner table. But texting language is not the mortal enemy of eloquence that it’s been made out to be. And since by now it looks like it is most certainly here to stay, you may want to learn to embrace texting language for the incredible new tool that it is. After thousands of years, we can finally write the way that we speak!

Janet Barrow writes about the places where language meets history, culture, and politics. She studied Written Arts at Bard College, and her fiction has appeared in Easy Street and Adelaide Magazine. After two years in Lima, Peru, she recently moved to Chicago.
To learn more about ALTA’s language services, including translation, training, interpretation, and testing, visit: www.altalang.com.