The Etymology of Advent

Posted by Jes Gearing in Language and Culture on November 30, 2009 2 Comments 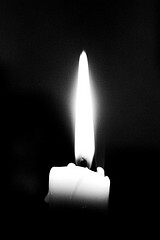 Yesterday, November 29, 2009, marked the beginning of Advent, the first day in the year of liturgical Western Christian churches. Falling on the fourth Sunday before Christmas, the holiday was celebrated around the world in churches by the lighting of candles, the recitation of certain Biblical verses pertaining to the birth of Christ, the liturgical color of purple (on the priest’s vestments or on the tabernacle), and, in some cases, fasting.

One of the more humorous, but now extinct, traditions is that of Norman farmers who had children run through their fields with lit torches. The children set fire to bundles of straw as a gesture to drive out rats and other vermin that might destroy the crops. it doesn’t seem like the safest or holiest of traditions, but it went on for some time. More common today are the Advent candles or Advent calendars found in many households. During each day of the Advent month (starting four weeks before Christmas), one section of the candle is burned or one door/box/piece of the advent calendar is opened/removed to mark the passing of Advent.

The etymology of Advent is fairly straight forward—the English word stems from the Old French advent which is from the literary form auvent. The French, of course, stems from the Latin adventus for “arrival.” In French, however, the only meaning of the word is that of the sense applied in Christian tradition, the coming of the Savior, nowadays, the period of the Nativity beginning four weeks before Christmas. In English, however, it has passed into the generic sense of any important arrival. This generic meaning did not arrive in the English language until perhaps 1742, but it was not recognized in English dictionaries as such until the mid-nineteenth century. The religious sense of the word stretches back to the tenth or eleventh century.

With Hanukkah starting on December 11, Kwanza around the same time as Christmas, and, most importantly, Festivus on December 23, it’s certainly the advent of the holiday season no matter what faith or cultural upbringing.