Posted by Jes Gearing in Etymology on August 13, 2009 0 Comments 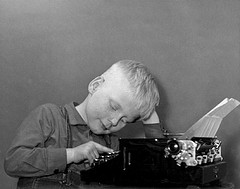 David Barnett posted a lovely etymology of the word “hack” in today’s UK Guardian Book Blog. In it he chronicles the rise and fall of the word, with all its connotations from a horse to a paltry writer to a loud and proud reporter.

Derived from the “hackney,” a horse-drawn carriage, “hack” came to mean a writer who churned out oodles of books, articles, and, generally, intellectually worthless material. These writers wrote only for the money, and thus, the writer-turned-hack was a sham. In journalism, however, “hack” has been reclaimed as a positive term, “possibly thanks to Private Eye’s constant use of ‘hack’ and ‘hackette’ to describe male and female newspaper writers.” Further, Barnett claims with much enthusiasm: “We in newspapers rarely admit to literary pretensions in our day-to-day work – today’s newspaper is indeed tomorrow’s chip wrapper (or tomorrow’s cached archived data, to modernise the phrase somewhat).”

“We in newspapers rarely admit to literary pretensions”—ouch, that’s a little rough for the writers out there. Barnett’s point is that no writer writes truly for the love of writing,—“And which among our leading literary lights today writes purely for the love of it” (again, debatable because I’d bet my paycheck that Salman Rushdie and Seamus Heaney write because they love it)—there’s always a monetary element, and, somehow, journalism trumps the pretension of art by announcing forthright that it is a career, a vocation that actually pays.

This pretension is mixed up in the idea of “mass market literature,” which is, as any writer would agree, a slippery slope to judge a book on, for what exactly is the mass market novel or the mass market readership? Under Barnett’s definition, a hack is a “prolific, inventive [writer], writing for a populist mass-market readership [who] nurs[es] a glimmer of hope that someone might bung [him] a few quid for it.” According to the Oxford English Dictionary, however, a hack is much worse, “a literary drudge, who hires himself out to do any and every kind of literary work; hence, a poor writer, a mere scribbler.”

How exactly did the mass market come into play? If a hack is a writer who hires himself out, how does that automatically imply the largest readership out there—the folks who read Nora Roberts’ romance novels and Stephen King’s horror stories (I’m not debating the literary quality of both of these writers, I’m just admitting that they line the mass market paperback shelves of your local bookstore). Does writing, as Barnett claims to have done, “two novels, a couple of short stories, a radio sitcom and a comic book script” make him a hack (and how is that different than any other writer out there, simply the amount of material)? How many people have read his short stories or his novels, and, really, how much did he make off them? Most writers will agree, you don’t get paid much from royalties (unless you are the aforementioned Nora Roberts or Stephen King). Furthermore, what separates his novels and short stories from the literary pretensions of non-hack writers?

I see nothing wrong with Barnett wanting to shout from the rooftops “My name is David Barnett, and I’m a hack,” but I would love to sit down with him over a cup of coffee and ask him to explain his personal definition of a hack. After all, I’m a writer who writes because I love to write, but hey, if someone wants to pay me for it I’m not going to say no! (Wait, does that make me a hack?)